You are here: Home › News › Telescope Cleans Up Its Image
By Will Parker on December 22, 2005 in News 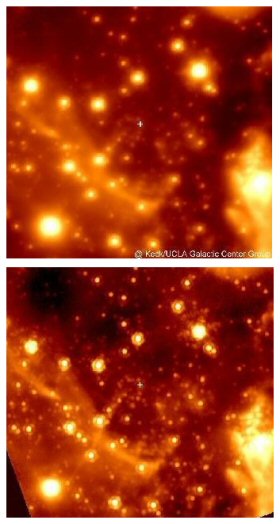 A new adaptive optics system has allowed University of California – Los Angeles (UCLA) astronomers to capture the first clear pictures of the center of our galaxy, including the area believed to harbor a super-massive black hole. The new system allows the Keck telescope in Hawaii to “see” clearly through the distorting effects of the Earth’s atmosphere. “Everything is much clearer now,” said UCLA astronomer Andrea Ghez. “We used a laser to improve the telescope’s vision – a spectacular breakthrough that will help us understand the black hole’s environment and physics. It’s like getting Lasik surgery for the eyes, and will revolutionize what we can do in astronomy.”

The Earth’s atmosphere has long been the bane of astronomers trying to capture clear images of the night sky but the new laser can be used to correct the atmosphere’s distortions and clear up the picture. The researchers call this new technology Laser Guide Star adaptive optics and believe it will lead to important advances in the study of planets in our solar system and outside of our solar system. Laser Guide Star works by generating an artificial bright “star” which reveals the atmosphere’s distortions. Once they are mapped, the distortions can then be nullified to create clearer images.

Using the new system, the scientists have captured images of the center of the galaxy, targeting the super-massive black hole 26,000 light years away (in the center of the before-and-after images). This approach allowed them to study the infrared light emanating from very hot material about to be pulled through the black hole’s event horizon. “We are learning the conditions of the infalling material and whether this plays a role in the growth of the super-massive black hole,” Ghez said. “The infrared light varies dramatically from week to week, day to day and even within a single hour.”