GM Tomatoes May Pave Way For Other Drought Resistant Crops 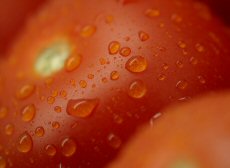 The Proceedings of the National Academy of Sciences carries news of a new genetically modified (GM) tomato plant that can thrive in drought conditions. The research team, from Texas A&M University, modified tomato plants to over-express the gene AVP1, which resulted in stronger, larger root systems that made better use of limited water.

Researcher Dr. Kendal Hirschi said that experiments showed that unmodified plants suffered irreversible damage after five days without water, as opposed to the transgenic tomatoes, which began to show signs of damage after 13 days but rebounded completely as soon as they were watered. "The gene gave us a better root system, and the root system could then take the adjustment to drought stress better and thus grow better," he noted.

Although consumers still have lingering concerns about the safety of GM plants, the researchers involved believe that modifications like this one have the potential to revolutionize agriculture and improve food production worldwide by addressing an increasing global concern: water scarcity. "This technology could ultimately be applied to all crops because it involves the over-expression of a gene found in all plants," said co-researcher Dr. Roberto Gaxiola.

Changing patterns of rainfall may mean an increase in drought conditions for previously productive farming areas which could disrupt food production. The researchers believe that to overcome these food shortages, "it will be necessary to increase the productivity of land already under cultivation and to regain the use of arable land lost to scarce water supplies."