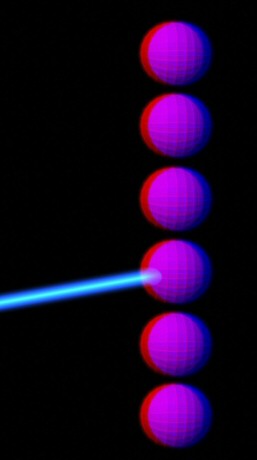 In a demonstration of just how weird the quantum world is, scientists at the National Institute of Standards and Technology (NIST) have manipulated six atoms into spinning together in two opposite directions at the same time. This so-called Schrödinger "cat" state was achieved by entangling six beryllium ions (charged atoms) so that their nuclei were collectively spinning clockwise and counterclockwise at the same time.

The experiment, described in Nature, is a clear demonstration of the quantum concept of entanglement, which occurs when the quantum properties of two or more particles are correlated, and which Albert Einstein called "spooky action at a distance."

But cats are never observed in such states in the macroscopic "real world," so physicists believe that there is a boundary where the strange properties of quantum mechanics - the rule book for Nature's smallest particles - give way to the physical laws that govern our everyday experience. While the NIST experiment is a long way short of full entanglement of a real cat's roughly 1026 atoms, it extends the domain where Schrödinger cat states can exist to at least six atoms.