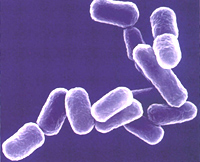 The pressures to evolve antibiotic resistance and other new abilities in response to a changing environment, force bacteria to "steal" genetic information from other better-adapted types of bacteria through the bacterial equivalent of sex, known as horizontal gene transfer. This lets the bacteria evolve the networks of chemical reactions that enable them to do new things, such as defend themselves against antibiotics or antibacterial sprays.

Now, working with the E.coli bacterium, researchers from the University of Bath have conducted a systematic study of how bacteria change their 'metabolic networks'. The study, appearing in Nature Genetics, pieces together the history of new metabolic genes acquired by E.coli over the last several hundred million years.

The researchers estimate that approximately 25 of E.coli's roughly 900 metabolic genes have been added into its network through horizontal gene transfer in the last 100 million years. This compares to just one addition by the most common source of new genes in animals. Why did E.Coli need all these new genes? To find out, the researchers cross examined dozens of E.coli's closest bacterial relatives to see which genes were most commonly exchanged between them. This would bring to light the genes that have contributed the most to the evolution of metabolic networks across bacteria.

By and large, it was found that most of these genes helped bacteria cope with specific environments and challenges. Almost exclusively, the new genes were needed for new functions, not to make the bacteria better at what they were already doing. "Metabolic networks are systems of interacting proteins, which perform the chemistry with which a bacterium builds its own components," said University of Bath researcher, Martin Lercher. "Bacteria often acquire new genes by direct transfer from other types of bacteria; in a way, that's the bacterial world's sex, and it plays a crucial role in how pathogenic bacteria acquire resistance to antibiotics."

Lercher said the study was the first to examine the mechanism that allows complete metabolic networks to change over evolutionary time. "We found that bacteria use new genes not to improve their performance in the environments they already know, but to adapt to new or changing environments; and accordingly, genetic changes happen at their interface with the environment. In this way, bacteria are just as lazy as humans: why invent the wheel twice if someone else has already found a solution to your problem?"