You are here: Home › News › Probiotics Touted As New Weapon Against Hospital Bugs
By Will Parker on November 1, 2005 in News 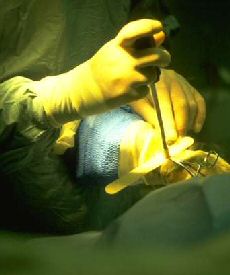 Methicillin-resistant Staphylococcus aureus (MRSA) is becoming more and more common in hospitals, with antibiotics becoming less and less effective at getting rid of it. But rather than looking at new antibiotics to provide the answer, one scientist believes we should instead be turning our attention to “good” bacteria.

Professor Mark Spigelman, from University College London (UCL), writes in a discussion paper that doctors might be better off washing their hands with yoghurt, instead of relying on antiseptic soap-scrubbing. His paper, in the Annals of the Royal College of Surgeons, suggests that the time has come to re-evaluate the concept of using antibiotics and scrubbing hands and wounds with antiseptic soaps. Instead, he outlines a six-point proposal to set up surgical hospitals which would be antibiotic-free.

“Inappropriate use of antibiotics remains a major problem, despite our ever-growing understanding of how bacteria behave. For example, any student who has grown bacteria in a lab will know that they generally do not grow on top of one another. So when we wash our hands, we could actually be killing off harmless [bacteria] to the extent that we leave space for other bacteria, such as MRSA strains, to settle,” said Spigelman.

“It must be remembered that after almost 40 years, MRSA has not become widespread except in hospitals where we use the most advanced antibiotics and most rigorous antiseptic measures. Why is this? More of the same does not seem to be working – new antibiotics and antibacterial soaps have not stopped MRSA,” he added.

Spigelman suggests that research should be carried out to investigate whether saturating the skin with ‘good’ bacteria would offer better protection against deadly germs. “Perhaps we should be thinking about using probiotics and even dipping our hands after thorough washing into a solution which contains harmless bacteria, which could then colonize our skin and prevent pathogenic bacteria from settling on it.”

Spigelman acknowledges the idea might sound absurd but believes probiotic cleaning techniques are well worth exploring. “We should aim to set up a handful of hospitals where the use of antibiotics would be banned, and any patients who needed them would be transferred to an antibiotic-using hospital. Doctors from these hospitals would not be allowed to enter hospitals which use antibiotics. At the same time we could trial the benefits of using ‘good’ bacteria to saturate the skin on doctors’ hands and even patients’ wounds prior to surgery, to see if this would prevent the settling of pathogenic, antibiotic-resistant bacteria,” he said.