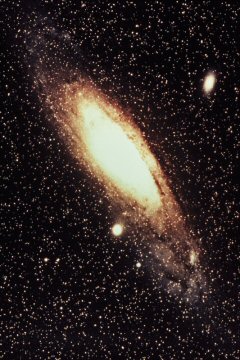 Researchers from the University of Washington and Harvard University have turned up some interesting findings about possible realities based on math modeling the beginnings of the Universe. Andreas Karch (UW) and Lisa Randall from Harvard set out to model how the Universe was arranged right after the big bang, and then watch how the cosmos evolved as it expanded and diluted. The only assumptions they made were that it started with a generally smooth configuration, with numerous structures - called "branes" (membranes) - that existed in various spatial dimensions from one to nine.

Gravity altered in such a way would generate a very odd reality. "With gravity diminishing rapidly with distance, a seven-dimensional existence would not have planets with stable orbits around their sun," Karch said. "I am not precisely sure what a Universe with such a short-range gravity would look like, mostly because it is always difficult to imagine how life would develop under completely different circumstances. But in any case, planetary systems as we know them wouldn't form. The possibility of stable orbits is what makes the three-dimensional world more interesting."