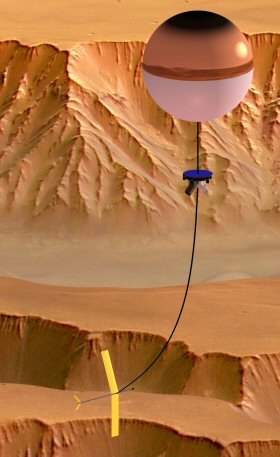 After nearly two years on the surface of Mars, the Mars rovers Spirit and Opportunity have returned a wealth of valuable information from their wanderings. But the pace of their explorations is painfully slow, covering only a few miles since their mission began. Orbiters can certainly cover the surface of a planet much more quickly, but they lack the "hands-on" capabilities provided by surface based instruments.

Now, scientists working in the private sector want to speed up such explorations using a balloon based Mars exploration vehicle combining the global reach of orbiters and the high resolution observations enabled by surface based rovers.

A company called Global Aerospace Corporation (GAC), funded by NASA, is behind the proposal that would use next-generation balloons that can drop instrument packages down to the surface when required. Balloons have been long recognized as unique scientific platforms due to their relatively low cost and low power consumption. And they have been used in planetary exploration previously, when two balloons flew in the atmosphere of Venus in 1984. But the inability to control the flight path of balloons has limited their usefulness, and scientific interest in their use has waned in recent times.

But GAC say they have solved the guidance problem by designing an innovative device, called, imaginatively enough, the Balloon Guidance System (BGS), that allows the balloon to be steered through the atmosphere. The BGS is effectively an aerodynamic surface - a wing - that hangs below the balloon on a tether several kilometers long. The lifting force on the BGS wing can then be directed sideways and used to pull the balloon left or right relative to the prevailing winds.

The boffins at GAC say that the balloon would float several kilometers above the surface of Mars, capturing images at very high resolution. But rather than just floating where the wind takes it, the balloon could be directed to fly over specific targets and to deploy small surface laboratories, allowing surface based experiments and analysis.

The synergy of guided low-level flight coupled with "on-demand" surface based instruments seems sound enough. GAC cite the search for methane as an example where balloons and droppable instrument packages could work well: Instruments in the balloon's gondola could be used to measure traces of methane in the atmosphere and follow its increasing concentrations to the source on the ground, where an instrument package could then be deployed. It's entirely possible that methodologies like this could greatly accelerate the exploration of Mars.