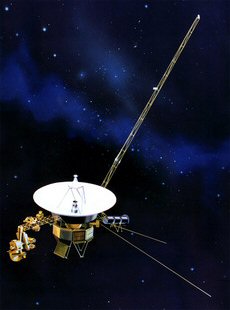 When the Voyager space probes were launched in 1977, scientists involved in the mission did not expect to still be receiving signals from them nearly thirty years later. "When we started none of us thought of this mission lasting this long. Now it has gone 28 years, and there is no reason it can't go on for many more," said University of Maryland's Frank McDonald.

Their original mission was to explore the giant planets Jupiter and Saturn, however, after completing their initial assignments, the pair just kept going and are now exploring the outermost edge of the sun's domain and beyond. Scientists involved in the project say that both Voyagers have adequate electrical power and attitude control propellant to keep returning scientific data until 2020.

Each of the Voyagers also carry a phonograph record containing information about the diversity of life and culture on Earth, as well as Earth's location, for any extraterrestrials they might encounter.

But providing a road-map for Earth-enslaving alien hordes is secondary to the probes' main function of sending back data on the conditions it encounters in deep space. And the data is not what scientists expected.

A study appearing in Science, carries some surprising findings about the conditions existing at the heliosheath, the transition region at the edge of the solar system. "We have confirmed, for the first time, that Voyager 1 crossed the termination shock on Dec. 16, 2004," said McDonald, coauthor of the paper.

The termination shock marks the beginning of the transition region. "The termination shock - a shock wave in the solar wind that marks the slowing of the supersonic solar wind to subsonic speed - had been universally thought to be a prodigious accelerator of particles and our findings largely confirm that," said Matthew Hill, research scientist and co-author. "This paper describes a remarkable increase in particle intensity with energetic characteristics unlike anything we have seen before. In addition, the LECP [Low Energy Charged Particle] instrument indirectly determines that the solar wind speed in the heliosheath is clearly sub-sonic."

Hill explained that one very surprising finding was that certain particles called anomalous cosmic rays do not appear to be accelerated at the termination shock, or at least not in the area where Voyager 1 crossed. This is despite the "near unanimity of opinion" among scientists that these rays would be accelerated. "This finding has the potential to turn three decades of anomalous cosmic ray research on its head," said Hill.