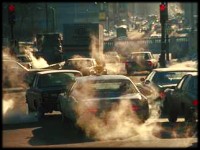 We may be significantly underestimating air pollution's role in causing early death, say a team of researchers who have just finished analyzing twenty years of data from locales around Los Angeles. Taking in 260 L.A. neighborhoods, the epidemiologists found that pollution's chronic health effects are two to three times greater than earlier believed.

The large number of participants allowed the researchers to control for factors such as smoking, diet and education. The researchers looked specifically at levels of particulate matter - a mixture of airborne microscopic solids and liquid droplets - that includes acids, organic chemicals, metals, dust and allergens.

The researchers found that for each increase of 10 micrograms per cubic meter (�g/m3) of fine particles in the neighborhood's air, the risk of death from any cause rose by 11 to 17 percent. Ischemic heart disease mortality risks rose by 25 to 39 percent for the 10 �g/m3 increase in air pollution. "By looking at the effects of pollution within communities, not only did we observe pollution's influence on overall mortality, but we saw specific links between particulate matter and death from ischemic heart disease, such as heart attack, as well as lung cancers," said the study's lead author Michael Jerrett, from the University of Southern California.

An increase in deaths from heart disease is supported by earlier research showing links between air pollution and atherosclerosis, a thickening of artery walls that may lead to heart attack and stroke. Medical scientists believe particulate matter may promote inflammatory processes, including atherosclerosis, in key tissues. "We have convincing evidence that those causes of death that we might expect from inflammation, ischemic heart disease and lung disorders, are elevated in areas of higher pollution levels," Jerrett said.

"Restrictions on tailpipe emissions have gotten tighter, but there are more trucks and cars on the roads and people are driving farther. This study may cause us to reflect on how we use our cars, what cars we drive and whether we can do anything to make tailpipe emissions from all vehicles less harmful to health," concluded Jerrett, who now intends to conduct a similar study in New York City.