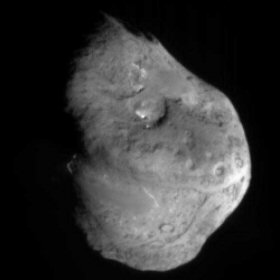 The detailed analysis of the spectral data from Deep Impact's collision with the comet Tempel 1 is now starting to pay dividends. "Prior to our Deep Impact experiment, scientists had a lot of questions and untested ideas about the structure and composition of the nucleus, or solid body of a comet, but we had almost no real knowledge," said Deep Impact principal investigator Dr. Michael A'Hearn. "Our analysis of data produced by Deep Impact is revealing a great deal, much of it rather surprising."

It appears that Tempel 1 has a very fluffy structure that the investigative team says is weaker than a bank of powder snow. While the gravity is extremely weak, it manages to hold the fine dust of the comet together. More surprising was evidence of what appear to be impact craters on the surface of the comet. Previous observations of two other comets showed no evidence of impact craters. "Tempel 1 has� features that satisfy all the criteria for impact craters, including varying size," A'Hearn said. "The problem in stating with certainty that these are impact craters is that we don't know of a mechanism by which some comets would collide with the flotsam and jetsam in our solar system, while others would not."

But the most interesting finding is the huge increase in carbon-containing molecules detected in the ejection plume created by the collision. This suggests that comets contain a substantial amount of organic material. The researchers also saw emission bands for water vaporized by the heat of the impact, followed a few seconds later by absorption bands from ice particles ejected from below the surface. This reinforces the idea of comets as 'dirty snowballs' - containing water and organic compounds, that under the right conditions, could act as the seeds of life. It's possible that comets could have brought those seeds to Earth early in the planet's history, when strikes by asteroids and meteors were common.

Other findings revealed intimate details of how the comet is affected by the sun's heat. "The infrared spectrometer gave us the first temperature map of a comet, allowing us to measure the surface's thermal inertia, or ability to conduct heat to the interior," said researcher Dr. Olivier Groussin. It seems that the comet interior is well shielded from the solar heating experienced by the surface of the comet nucleus. He added that the nucleus of Tempel 1 is extremely porous and its porosity allows the surface of the nucleus to heat up and cool down almost instantly in response to sunlight. This means that heat is not easily conducted to the interior so the ice and other material deep inside the nucleus may be pristine and unchanged from the early days of the solar system.