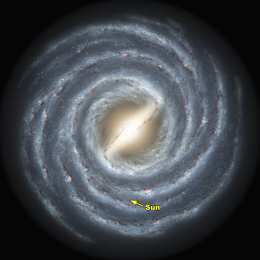 Using NASA's Spitzer Space Telescope, astronomers have been conducting a comprehensive structural analysis of our galaxy and found intriguing new evidence that the Milky Way is quite different from what we believe to be an ordinary spiral galaxy. The study, appearing in Astrophysical Journal Letters, reveals details of a long central bar feature that distinguishes the Milky Way from more average spiral galaxies.

Using Spitzer's infrared capabilities, the astronomers surveyed some 30 million stars in the plane of the galaxy in an effort to build a detailed portrait of the inner regions of the Milky Way. Such tasks are difficult, akin to trying to describe the boundaries of a forest from a vantage point deep within the woods. "This is hard to do from within the galaxy," said astronomer Ed Churchwell.

The telescope allowed the astronomers to cut through the obscuring clouds of interstellar dust and gather infrared starlight from tens-of-millions of stars at the center of the galaxy. They believe the new survey gives the most detailed picture to date of the inner regions of the Milky Way. "We're observing at wavelengths where the galaxy is more transparent, and we're bringing tens of millions of objects into the equation," said Robert Benjamin, the lead author of the new study. The new research, the University of Wisconsin-Madison astronomers say, clearly shows a bar-like structure.

Astronomers have long pondered the possibility that the Milky Way Galaxy has a long stellar bar through its center. Such phenomena are not unheard of in galactic taxonomy and they are clearly evident in other galaxies. The new study shows a bar, consisting of relatively old, red stars, spanning the center of the galaxy roughly 27,000 light years in length - 7,000 light years longer than previously believed. It also shows that the bar is oriented at about a 45-degree angle relative to a line joining the sun and the center of the galaxy. The estimates for the size and orientation of the bar are far different from previous estimates.

"To date, this is the best evidence for a long bar in our galaxy," Benjamin concluded. "It's hard to argue with this data."