Something Fishy About Sound 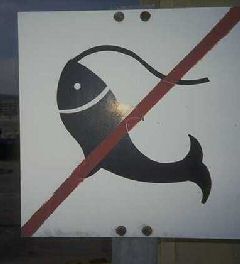 Cornell University researchers studying the auditory system of the plainfin midshipman fish (Porichthys notatus) say they have found a direct line of communication between the part of a vertebrate's brain that controls the vocal muscle system and the part of the ear that hears sound. The research may shed light on how other vertebrates hear and provide insights into some of the mechanisms that contribute to deafness in humans.

"We've studied so many things about these fish, and I never cease to be amazed by how similar the operation of their nervous system is to that of mammals," said Andrew Bass, author of the study published in the Journal of Neuroscience. "You don't need to study a mammal to understand what a mammal does." The general pattern of connections between neurons in the auditory system is the same in all vertebrates. While humans hear with the cochlea of the inner ear, the midshipman uses the sacculus, a part of the ear that in humans detects acceleration or linear movement.

The researchers found that as the fish's brain signals vocal muscles to make sound, a number of synchronized actions take place. The ear and brain are cued to the exact timing of a self-generated sound, distinguishing it from outside sounds. Just prior to a voicing, the brain warns the ear it should become less sensitive. The study marks the first time that scientists have found a direct line of communication between the part of a vertebrate's brain that controls the vocal muscle system and the part of the ear that hears sound.

"Hearing loss is a major pathology that humans deal with," said Bass. "And we don't understand that mechanism very well. Observing what these neurons do may offer insights into what leads to hearing deficits." Interestingly, the study contained absolutely no puns based on the author's surname.