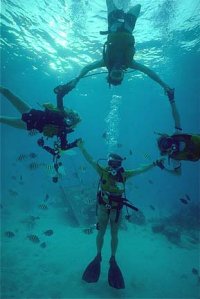 The Royal Society in the U.K. has issued a worrying report about rising acidity in the world’s oceans. “If CO2 [carbon dioxide] from human activities continues to rise, the oceans will become so acidic by 2100 it could threaten marine life in ways we can’t anticipate,” said report author Ken Caldeira, of the Carnegie Institution.

The world’s oceans are regarded as an important sink for capturing the CO2 created by human activity. Scientists say that more than a third of human-originated CO2 is absorbed by the oceans. Marine plants soak up the gas and convert it to food during photosynthesis. Marine organisms also use it to make their skeletons and shells, which eventually form sediments. But while marine organisms need CO2 to survive, work by Caldeira and his colleagues shows that too much CO2 in the ocean could lead to ecological disruption and mass extinctions.

The pH scale used to measure acidity runs from 1 to 14, with 7 being neutral. Anything that lowers pH increases acidity. The scientists calculated that over the past 200 years, the pH of surface seawater has declined by 0.1 units. If emissions of CO2 continue to rise as predicted by the Intergovernmental Panel on Climate Change’s IS92a scenario, there will be another drop in pH by 0.5 units by 2100. This level of acidity has not existed in the oceans for many millions of years. Additionally, the changes in the oceans’ chemistry will reduce its ability to absorb CO2 from the atmosphere, which will, in turn, accelerate the rate of global warming. “We can predict the magnitude of the acidification based on the evidence that has been collected from the ocean’s surface, the geological and historical record, ocean circulation models, and what’s known about ocean chemistry,” said Caldeira. “What we can’t predict is just what acidic oceans mean to ocean ecology and to Earth’s climate.”

Scientists believe the acidic water could interrupt the process of shell and coral formation and adversely affect other organisms dependent upon corals and shellfish. The acidity could also negatively impact other calcifying organisms, such as phytoplankton and zooplankton, some of the most important components of the planet’s food chain.

Carnegie director Chris Field said the report should “sound alarm bells around the world,” while it “strengthens the case for rapid progress on reducing CO2 emissions.”