You are here: Home › News › New Infrared Cosmos Scan Underway
By Will Parker on June 27, 2005 in News 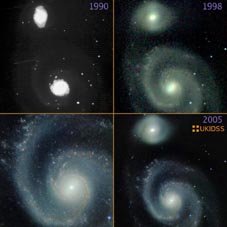 An ambitious new astronomical program is about to start searching the skies looking for some of the most remote and dimmest objects in the Universe. The newly developed United Kingdom Infrared Deep Sky Survey (UKIDSS) is said to be able to reach at least twenty times deeper than the largest existing survey conducted at this wavelength. The astronomers’ wish list of never-before seen phenomena includes remote quasars that are so far away that the expansion of the Universe has shifted their light into the infrared spectrum. And closer to home, the would-be stars that never became suns, residing in our own galaxy.

The latest images produced by UKIDSS are impressive, and confirm the power of the camera (WFCAM). The strength of WFCAM comes from the large field of view – equivalent to imaging the full moon in a single exposure – made possible because the camera contains four of the largest available new-generation infrared detectors. The team’s leaders believe that UKIDSS has already exceeded expectations, and they have great confidence in UKIDSS’ future. “We will have surpassed the size of the current best survey after just 2 weeks, and our plan is a survey 100 times greater,” said Steve Warren, UKIDSS Survey Scientist from Imperial College. The guys at Imperial College seem to love their powerful new toy, and Andy Adamson, Head of Operations for UKIRT, claims that: “UKIDSS is a tremendously ambitious survey, combining unprecedented depth with an enormous area on the sky to achieve its goals.”

The British astronomers overseeing the program say that infrared light can be used to study objects that are not hot enough to show up as visible light. Wannabe stars and other new phenomena revealed by UKIDSS will most likely help solve existing astronomical conundrums, such as when galaxies and quasars first lit up. Ultimately, astronomers want to understand the conditions in the Universe at the earliest times and to identify the ‘epoch of re-ionization’ – the time when the first galaxies and quasars began to shine, ending the Universe’s ‘dark ages’. The ‘let there be light’ moment, you might say. Astronomers calculate that this happened about 750 million years after the Big Bang (when the Universe was 6 percent of its present age), but want to pinpoint the time by finding the earliest possible quasars.

One standout component of the program involves the hunt for Y dwarfs. Y dwarfs are a type of Brown Dwarf – the ‘failed stars’ that are too small and cool to ignite and burn their hydrogen gas. The coolest brown dwarfs known have temperatures of 600K (over 300C), but theorists predict that there should be a missing link between these brown dwarfs and the cooler gas giant planets like Jupiter, which has a temperature of 150K (about -120C). Y dwarfs are that missing link, but because they are so cool and faint, they have never been seen before. The UKIDSS survey data will be used by thousands of astronomers all over Europe, and eventually all over the world. Andy Lawrence, the Principal Investigator, knows his team is bound to make new discoveries, but what these will entail is anybody’s guess. “It’s such a big leap I am expecting the unexpected…”