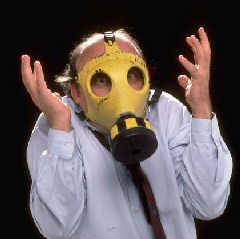 Street specific air pollution warnings will soon be available via text-messages in a pioneering project being tested in Central London and the Borough of Croydon. The European Space Agency (ESA) backed prototype service will initially warn around a thousand asthma sufferers prior to an elevation in air pollution, with additional patients to follow.

Like other systems currently in use, the pollution forecasts include predictions of overall effects on health using an index from one to ten. The YourAir service, however, surpasses current models because it resolves air pollution down to the scale of individual streets. The system can also predict harmful levels of nitrogen dioxide, ozone and airborne particles that are harmful to people with asthma, lung and heart problems. Sufferers in the borough of Croydon will receive this information directly via text message, in a linked project called AirTEXT. The messages will also advise on steps those most at risk can take to minimize their pollution exposure and manage their symptoms.

The AirTEXT and YourAir services are not only useful to those with health problems, as the high concentrations of pollutants often found along routes with heavy pollution sources can also harm healthy people.

YourAir, and the AirTEXT sister project, are being developed by Cambridge Environmental Research Consultants (CERC) as a demonstration service of ESA's PROMOTE project. The PROMOTE program is part of Global Monitoring for Environment and Security (GMES), a joint initiative between the ESA and the European Union that coordinates all available atmospheric, space and ground based information to develop beneficial operational services for organizations and citizens. The integration of European environmental monitoring stations allows services such as YourAir to work "by combining data from the various sources available," said CERC's Iarla Kilbane-Dawe. "It combines regional air quality forecasts provided by PROMOTE with information on local road traffic patterns." The use of regional air quality information is a necessary component because not all the pollution affecting a city actually originates there, with studies showing that up to half the air pollution found in some European cities might have come from elsewhere in the continent.

Future pollution forecasting models may include animations that show "the way pollution can concentrate near major roads and follows traffic patterns, and it demonstrates what we expect will become a routine type of urban air quality forecast within a few years," said Kilbane-Dawe. So far the system has a 90 percent accuracy rate, but Kilbane-Dawe and the CERC team hope to improve upon this figure in the near future. "For the next stage of the project we aim to improve the accuracy further by integrating other data sources, especially satellite observations and more data on traffic patterns."