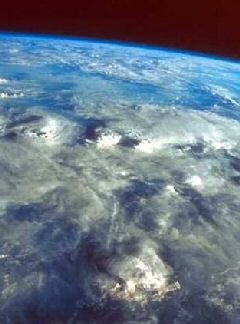 Scientists from Duke University have been studying the link between certain lightning events and the mysterious gamma ray emissions that emanate from the Earth's own atmosphere. Their study suggests that this gamma radiation fountains upward from starting points at surprisingly low altitudes in thunderclouds. Interestingly, these strong gamma outbursts seem to precede the associated lightning discharges by a split second.

Steven Cummer, from Duke University's Pratt School of Engineering, said that it all came as a huge surprise. "These are higher energy gamma rays than come from the sun. And yet here they are coming from the kind of terrestrial thunderstorm that we see here all the time." Cummer, and co-researchers Wenyi Hu and Yuhu Zhai, described their analyses in a paper published in the journal Geophysical Research Letters. Their research builds on earlier work by David Smith and Liliana Lopez of the University of California.

Emissions of gamma rays, the most energetic form of light, are usually triggered only by high-energy events in outer space, such as thermonuclear reactions and black-hole-creating star collapses. But in 1994, scientists using the Compton Gamma Ray Observatory satellite first detected gamma rays seemingly originating near the earth's surface. And researchers established that those emissions were connected to lightning. Beginning in 2002, the Reuven Ramaty High Energy Solar Spectroscopic Imager (RHESSI) satellite - launched to study x-rays and gamma rays from the sun - also began detecting larger numbers of what scientists began terming terrestrial gamma ray flashes (TGFs). Smith and Lopez were two of the four authors of a February 2005 paper that described RHESSI-detected TGFs, and also corroborated those with lightning frequency data.

In the new study, Cummer and his co-researchers made what he termed "very careful and continuous recordings" of lightning emissions in a targeted area over a four month period of 2004. They identified lightning episodes they could link in time and place to TGFs recorded by RHESSI in the tropical Caribbean region. "The Caribbean is 2,000-4,000 kilometers from our sensors - in the scale of things actually quite close. So we were able to say with very strong certainty whether lightning happened in the Caribbean at a specific time," said Cummer.

Their analysis raised major questions about how well the connection between lightning and gamma rays could be explained by a favored hypothesis known as "runaway breakdown." Runaway breakdown begins with collisions between extraterrestrial cosmic rays and the atmosphere, which generates a few very high energy electrons. A sufficiently strong electric field can further accelerate these electrons. That can cause additional collisions, producing more high energy electrons until "the whole process avalanches," said Cummer. Such an electron avalanche in the electrical field immediately following a strong lightning discharge could create a high energy electron beam at altitudes of between 30 and 50 kilometers, according to the hypothesis. That beam would then produce gamma rays as it interacts with the atmosphere.

"If this were the operating mechanism, we should see enormous lightning strokes associated with every one of those TGFs," Cummer said. "But we found that this was unequivocally not the case." Instead, the lightning strokes his group analyzed were 50-500 times smaller than what should be required to create TGFs by runaway breakdown. Their report suggested that runaway breakdown at a much lower altitude, created within "strong fields in or just above the thundercloud," could have triggered the TGFs instead. "It still almost certainly has to be runaway breakdown that's creating these," Cummer said. "The only real possibility is that it's much closer to the cloud top, and linked to something else happening inside the cloud."

The analysis also disclosed that, on average, TGFs occurred 1.24 milliseconds before their associated lightning strokes. "That was something we absolutely were not expecting," Cummer said. "But the coincidence between the lightning and the TGFs we found is too good to be random. So, even if the TGFs precede the lightning, they are in some way connected."