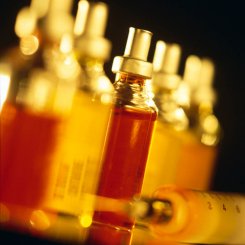 Bacteria that appear to target and trap HIV may protect humans against infection, say researchers studying lactobacillus. Their findings were reported at the 2005 American Society for Microbiology - Beneficial Microbes Conference. "I believe every life form has its natural enemy, and HIV should not be the exception," says researcher Lin Tao, of the University of Illinois at Chicago. "If we can find its natural enemy, we can control the spread of HIV naturally and cost-effectively, just as we use cats to control mice." The bacteria are strains of lactobacillus, commonly found colonizing the oral and vaginal cavities of humans. These so-called "good bacteria" do not cause disease. They target HIV because the virus is coated with the sugar mannose, which they use as a food source.

"Different bacteria have different sugar preferences," says Tao. "To block HIV, however, we needed to find bacteria that prefer the unusual sugar mannose and thus can capture it." To identify bacteria that target mannose, Tao and his colleagues isolated oral and vaginal lactobacilli from healthy humans and tested the ability of different strains to bind to baker's yeast, another microorganism coated with mannose-rich sugars. They found a small group of lactobacilli that bound to mannose and further testing against HIV revealed two strains that specifically trapped the virus and blocked infection.

Because of high rates of mutation, repeated attempts at developing a vaccine to protect against HIV have failed. Inoculating the major mucosal surfaces where HIV transmission occurs with the HIV-capturing lactobacilli may provide a safe and cost-efficient method for preventing the spread of HIV, says Tao. "This method can protect infants against HIV in breast milk and women against HIV upon sexual contact unobtrusively and inconspicuously via fermented foods or feminine products. If the method can be successfully developed and applied, the global spread of HIV can be controlled rapidly, effectively and safely."

Tao has to seek funding for further research from charities or philanthropists. "The major roadblock in the development of this technology is the lack of financial support. Drug companies and venture capitalists are not interested because the beneficiary populations are infants and women in poor countries," he said.