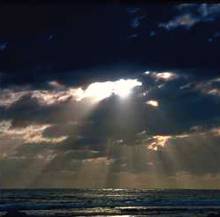 "Experiments have shown that nanobacteria are excreted from the body in urine and their dispersal from the ground into the atmosphere and stratosphere appears to be inevitable," said Sommer. The researchers say nanobacteria are now accepted as being widely prevalent in the terrestrial environment and the researchers believe they are widely dispersed in the stratosphere.

"This happens because nanobacteria, lifted from the ground by winds, could transit between the high humidity region of the clouds and the relatively dry inter-cloud regions, leading to oscillations between a dormant state and one of activation," explained Wickramasinghe. "Remnants of a sticky protein coating the nanobacteria makes them act as extremely efficient cloud condensation nuclei, with a tendency to aggregate to clusters upon contact."

The researchers conclude that the contribution of nanobacteria to pathogenic bioaerosols must overwhelm all other types of biological particles in the atmosphere.