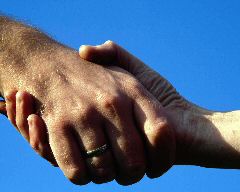 Author of the study, Peter Hurd, thought the whole idea was nonsense but he changed his mind when he saw the data. Hurd and co-researcher Allison Bailey have shown that a man's index finger length relative to ring finger length can predict how inclined that man is to be physically aggressive. Women, apparently, do not show a similar effect.

"More than anything, I think the findings reinforce and underline that a large part of our personalities and our traits are determined while we're still in the womb," said Hurd. "Finger length can tell you a little bit about where personality comes from, and that's what we are continuing to explore."

Hurd is conducting ongoing research in this area, including a study that involves measuring hockey players' finger lengths and cross referencing the results with each player's penalty minutes.