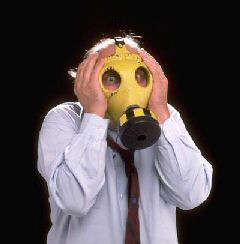 To comply with the Chemical Weapons Convention, Russia faces a race against time to dispose of around 40,000 tonnes of chemical warfare agents by 2007. Researchers writing in the Journal of Chemical Technology and Biotechnology believe bacteria may represent an ecologically sound way of doing this. Dr Inna Ermakova and colleagues from the Russian Academy of Sciences examined the possibility of using Pseudomonas putida to transform the toxic by-products contained in reaction masses that arise when chemical warfare agent mustard is destroyed by chemical detoxification. Usually, incineration or a process called bitumenisation are employed to deal with reaction masses, however both methods are expensive and pose environmental risks.

Mustard is a blistering agent that was first used in World War I. It can cause severe burns to the skin, and severe damage to the respiratory system and internal organs if ingested or inhaled. It accounts for around 2 percent of Russia's chemical warfare agents stockpile. Around 60 percent of the mustard reaction mass consists of derivatives of a toxic compound called 1,4-perhydrothiazine (PHT).

Ermakova's research team grew Pseudomonas putida in cultures containing mustard reaction mass. They then monitored the levels of PHT derivatives in the cultures until the bacteria stopped growing, using monoethanolamine (MEA) and ethylene glycol (EG) - both residual components of the initial de-toxification process that are present in the reaction mass - for growth. The results showed that the concentrations of each PHT derivative decreased significantly when Pseudomonas putida was grown in the presence of these carbon sources. By the time the bacteria had stopped growing, the concentration of the PHT derivatives had decreased by 50-55 percent. When further MEA and EG were added, the overall PHT decrease was 83 percent. In the absence of a carbon source other than PHT, the PHT levels remained constant. When no bacteria were present, the PHT concentrations also remained constant.

The authors suggest that the PHT undergoes transformation by the microbial cells when a growth substrate (MEA/EG) is present. However as the cells did not grow in the presence of PHT alone, the authors conclude that the bacteria cannot use them for growth. The group hopes that the bacterial strain can be used in the context of plant-microbial associations to create a new generation of biotechnologies for remediation of soils contaminated by chemical warfare agents or products of their detoxification. "Bioutilization of organic compounds of reaction masses is a biotechnological method that provides maximum environmental safety, since the pollutants are naturally degraded to innocuous products such as carbon dioxide and water, as well as microbial biomass," concluded Ermakova.