Hobbit's Small Brain May Have Had Advanced Cognitive Abilities 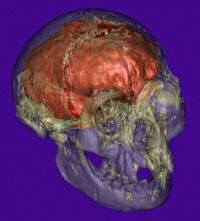 The tiny human discovered in Indonesia and nicknamed "the Hobbit" represents a previously unrecognized species of early humans, say the results of a detailed comparison of the fossil's brain case with those of humans and apes. Skeptics have to now maintained the fossilized remains were actually those of an individual who suffered from a disorder that limited brain growth known as microcephaly, but the new research suggests little similarity to microcephalics or pygmies. Instead, the researchers believe that the fossil is a member of a unique ancestral species. The new study appears in Science and was compiled by scientists at Florida State University, Washington University School of Medicine, the University of New England, Australia and the Indonesian Centre for Archaeology.

To learn more about the Hobbit's brain, scientists scanned brain cases in several skulls on loan from the Cleveland Museum of Natural History and the American Museum of Natural History. As they did with the Hobbit data, scientists then used the scanning results to produce virtual endocasts - three dimensional computerized representations of likely features of the brains contained in the skulls. Researchers produced additional data for comparisons by measuring latex endocasts - real models cast in latex of the likely brain structures found in 10 human skulls, 18 chimpanzee skulls and 5 skulls of Homo erectus (a hominin that lived in Asia and Africa from about 2 million to 25,000 years ago). Included among the human skulls were a microcephalic skull and a pygmy skull. In microcephalic patients, chromosomal abnormalities impede normal growth of the top of the skull and the brain. Scientists found few structural similarities between the brains of modern microcephalics and the Hobbit. "We still can't rule out secondary microcephaly, which can be caused by exposure to infections or toxins in the womb," Hildebolt notes. "But there are reports that scientists in Indonesia have found more fossils like the Hobbit. As those surface, it becomes much harder to attribute their brain size to secondary microcephaly." Scientists also found little similarity to the Hobbit in the endocast produced from the pygmy skull.

The finding adds to the debate about how advanced the Hobbit's mental abilities may have been. The cave where scientists found the Hobbit also contains remnants of stone tools, fire, and a pygmy elephant, suggesting but not proving that Homo floresiensis may have had surprisingly advanced cognitive abilities given its chimp-sized brain.