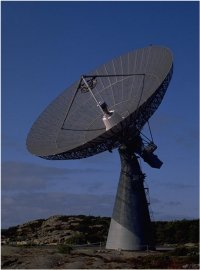 An object that seems to be an invisible galaxy made almost entirely of dark matter - the first ever detected - has been observed by a group of astronomers using the Lovell Telescope in England. The galaxy, which appears as a large amount of mass that rotates like a galaxy, could only be found using a radio telescope. The sighting was confirmed with the Arecibo telescope in Puerto Rico. The new dark galaxy has been named VIRGOHI21 and appears to be the first dark galaxy ever detected.

The astronomers, from the UK, France, Italy and Australia, have been studying the distribution of hydrogen atoms throughout the Universe. Hydrogen gas releases radiation that can be detected at radio wavelengths. In the Virgo cluster of galaxies they found a mass of hydrogen atoms a hundred million times the mass of the Sun. The Virgo cluster is a large group of galaxies about 50 million light years away. "From the speed it is spinning, we realized that VIRGOHI21 was a thousand times more massive than could be accounted for by the observed hydrogen atoms alone. If it were an ordinary galaxy, then it should be quite bright and would be visible with a good amateur telescope," said Dr Robert Minchin from Cardiff.

Similar objects that have been discovered in the past have since turned out to contain stars when studied with high-powered optical telescopes. Others have been found to be the remnants of two galaxies colliding. However, when the scientists studied the area in question using the Isaac Newton Telescope in La Palma, they found no visible trace of any stars, and no nearby galaxies that would suggest a collision. The astronomers first took observations of the dark object back in 2000 and it has taken almost five years to rule out all the other possible explanations. "As Sherlock Holmes famously said, 'When you have eliminated the impossible, whatever is left - however improbable - must be the truth'," said team member Professor Mike Disney.