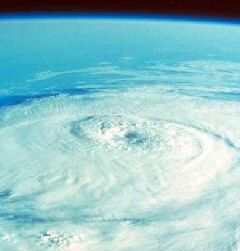 An article in the journal Science suggests that a natural particle accelerator operates in the Earth's upper atmosphere at energies comparable to bursts emitted from black holes and neutron stars. Occurring above thunderstorms, terrestrial gamma-ray flashes (TGFs) are very short blasts of gamma rays, lasting about one millisecond, that are emitted into space. The gamma rays are thought to be emitted by electrons traveling at near the speed of light when they scatter off of atoms and decelerate in the upper atmosphere. The researchers, from the University of California and the University of British Columbia say that TGFs were first observed in 1994 by the Burst and Transient Source Experiment. New observations from the Reuven Ramaty High Energy Solar Spectroscopic Imager (RHESSI) satellite raise the maximum recorded energy of TGFs by a factor of ten and indicate that the Earth gives off about 50 TGFs every day, and possibly many more. TGFs have been correlated with lightning strikes and may be related to visible phenomena that occur in the upper atmosphere over thunderstorms, such as red sprites and blue jets. Just how these various phenomena are related is a question the RHESSI investigators plan to pursue in collaboration with other researchers around the world.

"The idea that the Earth, a fairly small and tame planet, can be an accelerator of particles to ultrarelativistic energies is fascinating to me," said David Smith, at University of California, Santa Cruz. "The energies we see are as high as those of gamma rays emitted from black holes and neutron stars."

The exact mechanism that accerates the electron beams to produce TGFs is still uncertain, he said, but it probably involves the build-up of electric charge at the tops of thunder clouds due to lightning discharges, resulting in a powerful electric field between the cloudtops and the ionosphere, the outer layer of Earth's atmosphere. "Regardless of the exact mechanism, there is some enormous particle accelerator in the upper atmosphere that is accelerating electrons to these very high energies, so they emit gamma rays when they hit the sparse atoms of the upper atmosphere," Smith said. "What's exciting is that we are now getting data good enough for the theorists to really test their models."

The authors estimated a global average rate of about 50 TGFs a day, but the rate could be up to 100 times higher if, as some models indicate, TGFs are emitted as narrowly focused beams that would only be detected when the detecting satellite is directly in their path. The duration of TGFs recorded by RHESSI ranged from 0.2 to 3.5 milliseconds. The most energetic TGF photons detected by RHESSI were in the range of 10 to 20 million electron volts (10-20 MeV), or about 300 times as energetic as medical x-rays. The electrons that emitted these gamma rays would have been traveling at 99.99 percent of the speed of light, with energies on the order of 35 MeV.

The findings raise many interesting questions, including whether the electrons that emit TGFs ultimately contribute to the high-energy electrons in Earth's radiation belts. "This is a very interesting process involving extreme physics right here on Earth, and if we can understand the process here it might give us insights into similar processes in less accessible parts of the universe," said Smith.