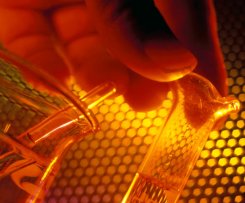 A team of researchers has devised a system that consistently converts the measles virus into a therapeutic killer that hunts down and destroys cancer cells. The researchers harnessed the viral trait for attacking and commandeering cells, and then redirected the virus to attack diseased, rather than healthy cells. The research, appearing in Nature Biotechnology, was carried out on laboratory animals implanted with two kinds of human cancer cells, ovarian cancer and lymphoma. Lead researcher Stephen Russell of the Mayo Clinic's Molecular Medicine Program said it is probably still years away from use as a human therapy but the concept has at last been proved in mice with human cancer tumors.

"When I saw the data, I was completely stunned. It's the sort of thing that, having worked on targeting viruses for about 15 years, I just couldn't believe that we'd finally got what we'd been hunting all that time," said Russell. "It's very clean, very clear targeting. Our results show that we've efficiently ablated the ability of the measles virus to interact with its two natural receptors. And they also show that we can take our pick as to what new receptor we target and send the virus after it."

The measles virus became the focus for this kind of research several years ago when the surprising finding was made that the measles strain used internationally for vaccinations has natural anticancer activity. "But we had a concern that the measles virus may be a little too promiscuous in its ability to infect both cancer cells and non-cancer cells, so we wanted to develop a method whereby we could retarget the virus to infect cancer cells only," says Russell. "And we succeeded."

The team used bioengineering techniques to reprogram the measles virus to seek a cancer cell to bind to instead of its natural binding partner. Then they invented a "molecular tag" that they attached to structures on the outside of the cancer-seeking measles virus. This tag is the key innovation of their work and central to the success of the team's investigation. It enables researchers to grow retargeted measles virus on special "universal substrate cells" - while at the same time conserving the viral component for targeting and destroying tumors. Mass production of a retargeted virus was not possible before this specific innovation of the molecular tag - and research in this area was previously at an impasse. "The virus goes where it's meant to go, and it destroys the tumors in a targeted way,'' concluded Russell.