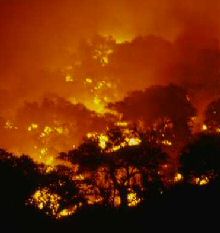 Ancient hunters and gatherers may have triggered the failure of the annual Australian Monsoon some 12,000 years ago by burning massive tracts of the country's interior, resulting in the desertification that is evident today, says a new study. Researcher Gifford Miller of the University of Colorado at Boulder said the new study builds on his research group's previous findings that dozens of giant animal species became extinct in Australia 50,000 years ago due to ecosystem changes caused by human burning. This study, appearing in Geology, indicates such burning may have altered the flora enough to decrease the exchange of water vapor between the biosphere and atmosphere, causing the failure of the Australian Monsoon over the interior.

"The question is whether localized burning 50,000 years ago could have had a continental-scale effect," said Miller. "The implications are that the burning practices of early humans may have changed the climate of the Australian continent by weakening the penetration of monsoon moisture into the interior."

Geologic evidence indicates the interior of Australia was much wetter about 125,000 years ago during the last interglacial period. Although planetary and meteorological conditions during the most recent ice age caused Earth's major monsoons to waver, all except the Australian Monsoon came back to full force during the Holocene Period beginning about 12,000 years ago. Although the Australian Monsoon delivers about 39 inches of rain annually to the north coast as it moves south from Asia, only about 13 inches of rain now falls on the continent's interior each year. Lake Eyre, a deep-water lake in the continent's interior that was filled by regular monsoon rains about 60,000 years ago, is now a huge salt flat that is occasionally covered by a thin layer of salty water.

The earliest human colonizers are believed to have arrived in Australia by sea from Indonesia about 50,000 years ago, using fire as a tool to hunt, clear paths, signal each other and promote the growth of certain plants, said Miller. Fossil remains of birds and marsupials indicate the interior was made up of trees, shrubs and grasses rather than the desert scrub environment present today. The researchers used global climate model simulations to evaluate the atmospheric and meteorological conditions in Australia over time, as well as the sensitivity of the monsoon to different vegetation and soil types. A climate model simulating a forested Australia produced twice as much annual monsoon precipitation over the continental interior as the model simulating arid scrub conditions.

"Systematic burning across the semiarid zone, where nutrients are the lowest of any continental region, may have been responsible for the rapid transformation of a drought-tolerant ecosystem high in broad-leaf species to the modern desert scrub," said Miller. "In the process, vegetation feedbacks promoting the penetration of monsoon moisture into the continental interior would have been disrupted."

Evidence for burning includes increased charcoal deposits preserved in lake sediments at the boundary between rainforest and interior desert beginning about 50,000 years ago, Miller said. In addition, a number of rainforest gymnosperms - plants whose seeds are not encased and protected and are therefore more vulnerable to fire - went extinct at about that time. Natural fires resulting from summer lightning strikes have played an integral part in the ecology of Australia's interior, and many plant species are adapted to regimes of frequent fires. "But the systematic burning of the interior by the earliest colonizers differed enough from the natural fire cycle that key ecosystems may have been pushed past a threshold from which they could not recover," concluded Miller.