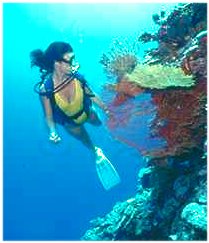 In a research paper appearing in the journal Geophysical Research Letters, Aussie scientists say that coral reefs around the world could expand in size by up to a third in response to increased ocean warming and the greenhouse effect. "Our finding stands in stark contrast to previous predictions that coral reef growth will suffer large, potentially catastrophic, decreases in the future. Our analysis suggests that ocean warming will foster considerably faster future rates of coral reef growth that will eventually exceed pre-industrial rates by as much as 35 per cent by 2100," says oceanographer Ben McNeil, from the University of News South Wales.

Coral reefs are built from calcium carbonate when red algae cement together a framework of coral skeletons and sediments. Seawater surface temperatures and the quantity of carbonate in seawater dictate their growth rate. Previous research has predicted a decline of between 20 and 60 percent in the size of coral reefs by 2100 relative to pre-industrial levels due to increasing CO2 levels in ocean surface waters. The new research suggests that present coral reef calcification rates are not in decline and are equivalent to late 19th century levels.

The Australian scientists have observed the calcification-temperature relationship at significant reef-building colonies around the world in the Indo-Pacific and at massive Porites reef colonies in Australia, Hawaii, Thailand, the Persian Gulf and New Ireland. The predicted increase in the rate of coral reef calcification is most likely due to an enhancement in coral metabolism and/or increases in photosynthetic rates of red algae, according to the scientists. "Our results show that increases in coral reef calcification associated with ocean warming outweigh decreases associated with increased atmospheric CO2", says co-researcher Richard Matear. "While initially showing a decrease in calcification up to 1964, ocean warming outweighs the CO2 effect and stimulates recovery of coral reef calcification."