Nutrients Being Bred Out Of Modern Crops 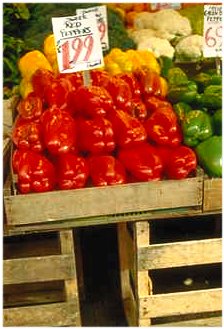 The study - led by Dr. Donald Davis - appears in the Journal of the American College of Nutrition.

According to Davis, establishing meaningful changes in nutrient content over a 50-year time interval was a significant challenge. "It is much more reliable to look at average changes in the group rather than in individual foods, due to uncertainties in the 1950 and 1999 values," Davis said. "Considered as a group, we found that six out of 13 nutrients showed apparently reliable declines between 1950 and 1999."

These nutrients included protein, calcium, phosphorus, iron, riboflavin and ascorbic acid. The declines, which ranged from 6 percent for protein to 38 percent for riboflavin, raise significant questions about how modern agriculture practices are affecting food crops. "We conclude that the most likely explanation was changes in cultivated varieties used today compared to 50 years ago," Davis said. "During those 50 years, there have been intensive efforts to breed new varieties that have greater yield, or resistance to pests, or adaptability to different climates. But the dominant effort is for higher yields. Emerging evidence suggests that when you select for yield, crops grow bigger and faster, but they don't necessarily have the ability to make or uptake nutrients at the same, faster rate."

According to Davis, these results suggest a need for research into other important nutrients and foods that provide significant dietary calories, such as grains, legumes, meat, milk and eggs. "Perhaps more worrisome would be declines in nutrients we could not study because they were not reported in 1950 - magnesium, zinc, vitamin B-6, vitamin E and dietary fiber, not to mention phytochemicals," Davis said.