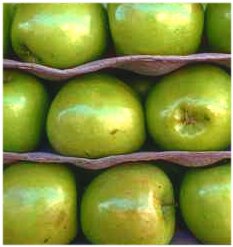 Researchers at Cornell University say the antioxidant quercetin found in apples and some other fruits and vegetables appears to protect brain cells against oxidative stress, a tissue-damaging process associated with Alzheimer’s and other neurodegenerative disorders. The new study – appearing in the Journal of Agricultural and Food Chemistry – adds strength to the theory that the risk of developing Alzheimer’s and similar diseases may be reduced by increasing one’s intake of antioxidant-rich foods.

“On the basis of serving size, fresh apples have some of the highest levels of quercetin when compared to other fruits and vegetables and may be among the best food choices for fighting Alzheimer’s,” says study leader C.Y. Lee. “People should eat more apples, especially fresh ones.” He cautions that protection against Alzheimer’s using any food product is currently theoretical and adds that genetics and environment are also believed to play a role in the disease. Lee also points out that results so far are limited to cell studies and that more advanced research, particularly in animals, is still needed to confirm the findings.

For the current study, the researchers exposed groups of isolated rat brain cells to varying concentrations of either quercetin or vitamin C. The cells were then exposed to hydrogen peroxide to simulate the type of oxidative cell damage that is believed to occur with Alzheimer’s. Brain cells that were treated with quercetin had significantly less damage to both cellular proteins and DNA than the cells treated with vitamin C and the cells that were not exposed to antioxidants. This demonstrates quercetin’s stronger protective effect against neurotoxicity, according to the researchers. Quercetin’s mechanism of action is still something of a mystery, but some suspect it might work by blocking the action of highly-active chemicals called free radicals, an excess of which are thought to damage brain cells as well as other cell types over time.

Lee said that even though quercetin was relatively stable during cooking, fresh apples are better sources of quercetin than cooked or processed apple products because the compound is mainly concentrated in the skin of apples. In general, red apples tend to have more of the antioxidant than green or yellow ones, although any apple variety is a good source of quercetin, he adds. For those who don’t like apples or may have difficulty eating the whole fruit, there are some promising alternatives. Other foods containing high levels of quercetin include onions, which have some of the highest levels of quercetin among vegetables, as well as berries, particularly blueberries and cranberries.