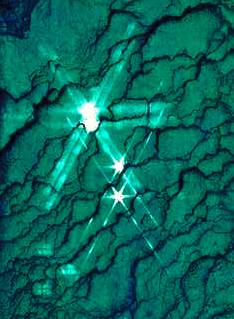 The microbial fuel cell captures electrons that are naturally released by bacteria as they digest organic matter and then it converts the electrons into electrical current. "We generated up to 72 watts per square meter, which is 2.8 times that generated in a larger device reported earlier this year in Environmental Science & Technology," said Bruce Logan, co-author of the research paper. Recently, Logan and his colleagues have tweaked microbial fuel cell devices to produce up to 350 watts per square meter. "Two years ago we had 0.1... and now we're in the 100s," he said. "We'd like to get in the range of 500-1000. We're looking for another order of magnitude increase."

Logan doesn't envision using his microbial fuel cell for the same type of applications as hydrogen fuel cells, such as in automobiles or houses. "We see using this any place where there's a high concentration of organic matter," he said.

The most obvious application would be in wastewater treatment plants, which essentially could power themselves as they treat water. Such a technology would be particularly useful in developing countries, Logan suggests, because it would produce a net amount of electricity, offering a reason to keep a treatment plant running besides just treating wastewater. "Even if it's only powering a cell phone tower, that would be a reason enough to keep it going," he said.

Other researchers have calculated that the energy potential in wastewater is almost 10 times the cost to treat it. "If we could achieve just one-twentieth of that power, we could break even," Logan said. "We're confident we're going to be able to do more than that. In our system, the two electrodes are separated by a proton exchange membrane, just like in a conventional hydrogen fuel cell. It opens the door to using existing hydrogen-gas based stack technologies with bacteria in water."

Logan said the device also could be used to treat waste from the food processing industry and farms - especially hog farms, which have tremendous problems with costs and odors. NASA scientists are even developing a similar technology to be used in manned space missions, turning the astronauts' waste into extra power. Logan plans to build a larger version of his microbial fuel cell for demonstrations; he hopes to have the design completed in 2005.