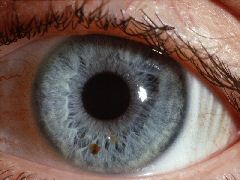 Working with ferrets, researcher Michael Weliky found neural activity that surprised him. "Adult ferrets had neural patterns in their visual cortex that correlated very well with images they viewed, but that correlation didn't exist at all in very young ferrets, suggesting the very basis of comprehending vision may be a very different task for young brains versus old brains," Weliky said.

A second surprise came when the ferrets were placed in a darkened room. The older ferrets' brains were still humming along at 80 percent as if they were still processing visual information. Since this activity was absent in the youngsters, Weliky and his colleagues were left to ponder, "what is the visual cortex so busy processing when there's no image to process?"

Weliky's inital research was aimed at studying whether visual processing bore any resemblance to the way real-world images appear. This finding may help lead to a better understanding of how neurons decode our world and how our perception of reality is shaped. Weliky, in an ironic twist, set 12 ferrets watching the reality-stretching film The Matrix. He recorded how their brains responded to the film, as well as to a null pattern similar to enlarged television static, and a darkened room. Movies capture the visual elements that are present in the real world. For instance, as Keanu's hand moves across the screen for a karate chop, the image of the hand and all the lines and color it represents moves across a viewer's visual realm essentially the same way it would in real life. By contrast, the enlarged static-blocks of random black and white-has no such motion. Weliky was able to graph the movie-motion statistically, showing essentially how objects move in the visual field. The test was then to see if there was any relationship between the statistical motion of the movie and the way visual neurons in the ferrets fired. Each visual neuron is keyed to respond to certain visual elements, such as a vertical line, that appears in a specific area of the ferret's vision. A great number of these cells combine to process an image of many lines, colors, etc. By watching the patterns of how these cells fired while watching The Matrix, Weliky could describe the pattern statistically, and match those statistics of how the ferret responded to the film with the statistics of the actual visual aspects of the film.

Weliky was surprised on two fronts. First, while the neurons of adult ferrets statistically seemed to respond similarly to the statistics of the film itself, younger ferrets had almost no relationship. This suggests that though the young ferrets are taking in and processing visual stimuli, they're not processing the stimuli in a way that reflects reality. "You might think of this as a sort of dyslexia," said Weliky. "It may be that in very young brains, the processing takes place in a way that's not necessarily disordered, but not analogous to how we understand reality to be. It's thought that dyslexia works somewhat like this, that some parts of the brain process written words in an unusual way and seem to make beginnings of words appear at their ends and vice versa. Infant brains may see the entire world the same way, as a mass of disparate scenes and sounds." Weliky is quick to point out that whatever way infant brains may interpret the world, just because they're different from an adult pattern of perception does not mean the infants have the wrong perception. After all, an adult interpreted the visual aspects of the film with our adult brains, so it shouldn't be such a surprise that other adult brains simply interpret the visual aspects the same way. If an infant drew up the statistics, it might very well match the neural patterns of other infants.

The second, and more surprising, result of the study came directly from the fact that Weliky's research is one of the first to test these visual neurons while the subject is awake and watching something. In the past, researchers would perhaps shine a light at an unconscious ferret and note which areas of the brain responded, but while that method narrowed the focus to how a single cell responds, it eliminated the chance to understand how the neural network of a conscious animal would respond. Accepting all the neural traffic of a conscious brain as part of the equation let Weliky get a better idea of the actual processing going on. As it turned out, one of his control tests yielded insight into neural activity no one expected.

When the ferrets were in a darkened room, Weliky expected their visual neurons to lack any kind of activity that correlated with visual reality. Neurologists have long known that there is substantial activity in the brain, even in darkness, but the pattern of that activity had never been investigated. Weliky discovered that while young ferrets displayed almost no patterns that correlated with visual reality, the adult ferrets' brains were humming along, producing the patterns even though there was nothing to see. When watching the film, the adult ferrets' neurons increased their patterned activity by about 20 percent.

"This means that in adults, there is a tremendous amount of real-world processing going on, 80 percent, when there is nothing to process," says Weliky. "This suggests that with your eyes closed, your visual processing is already running at 80 percent, and that opening your eyes only adds the last 20 percent. The big question here is what is the brain doing when it's idling, because it's obviously doing something important."

Since the young ferrets do not display similar patterns, the "idling" isn't necessary for life or consciousness, but since it's present in the adults even without stimulus, Weliky suggests it may be what gives the ferret its understanding of reality. The eye takes in an image and the brain processes the image, but 80 percent of the activity may be a representation of the world replicated inside the ferret's brain. "The basic findings are exciting enough, but you can't help but speculate on what they might mean in a deeper context," says Weliky. "It's one thing to say a ferret's understanding of reality is being reproduced inside his brain, but there's nothing to say that our understanding of the world is accurate. In a way, our neural structure imposes a certain structure on the outside world, and all we know is that at least one other mammalian brain seems to impose the same structure. Either that or The Matrix freaked out the ferrets the way it did everyone else."