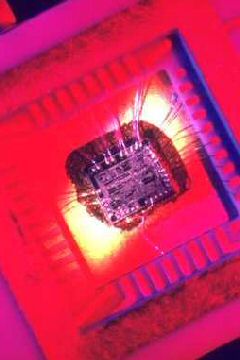 A Boston University research team led by physicist Pritiraj Mohanty has updated a retro technology in a bid to build better, faster data storage systems for today's computers. Mohanty has carved tiny switches out of silicon, fabricating mechanical switches that are thousands of times smaller than a human hair. When put through their paces as data storage tools, these nano-sized devices were capable of functioning at densities that far exceed the physical limitations of electromagnetic systems and could retrieve information at speeds in the megahertz and gigahertz ranges.

The researchers also found that the switches operated on miniscule amounts of power, about a million-fold less than that demanded by current storage systems. "This is a new ball game," say Mohanty. "By taking a new look at old technology, we have produced memory cells that are faster and better than those currently used. This mechanical device is a completely new approach to improving data storage."

The researchers used electron-beam lithography to produce the beam-and-pad design of the tiny devices, carving the switches from wafers made of single-crystal layers of silicon and silicon oxide.

To test the device's capabilities, the researchers clamped the nanostructure on each end, effectively suspending the beam, then drove a megahertz-frequency current through an attached electrode. When driven strongly enough, the beam switched between two different and distinct states, the needed "0" and "1" conditions commonly used to describe stored data. The tiny dimensions of the device allowed it to vibrate quickly, achieving a frequency of 23.57 megahertz. As a comparison, the hard drives in today's laptops can read at a speed of a few hundred kilohertz. The researchers speculate that even smaller beams could be produced that could achieve true read speeds in the gigahertz range.

Other advantages of the mechanical memory system include its angstrom-sized "range of motion", allowing it vibrate between states using only femtowatts of power, compared with the milliwatts, or microwatts, of power needed for read-write functions in current machines. The device also overcomes the superparamagnetic effect that limits contemporary systems, allowing the beams to be packed at densities that exceed the 100 gigabits per square inch that is the current constraint. In addition, unlike conventional electronic or magneto-electronic storage systems, these nanomechanical memory cells are resilient in electrical and magnetic fields. "They are extremely robust," says team member Robert Badzey. "Not only can these mechanical switches withstand radiation disturbances, like solar flares, they also are tough enough to work even after being dropped."