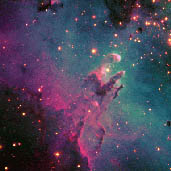 A Supernova Early Warning System (SNEWS) that detects neutrino particles that are the earliest emanations from the death throes of large stars will alert astronomers to the blasts before they can see the flash. SNEWS "could allow astronomers a chance to make unprecedented observations of the very early turn-on of the supernova," wrote the authors of an article about the new system in the New Journal of Physics.

Large stars end their lives in explosive gravitational collapses so complete that even the brilliant flashes of light usually announcing these rare "supernova" events stay trapped inside, unseen by astronomers, for the first hours or days of the collapse. Fortunately, these gravitational collapse supernovas also release large numbers of neutrinos that can immediately escape the gravitational maelstrom into space at the same speed as light, according to co-author Kate Scholberg, of Duke University. Neutrino bursts could afford the astronomical community its earliest possible alert of such supernovas, Scholberg and 20 co-authors wrote. "The primary goal of SNEWS is to provide the astronomical community with a prompt alert for a galactic supernova," the researchers said.

The idea is that neutrino detectors sensing a type II supernova will "basically light up at the same time," said Scholberg. "We can't use just one detector because they are cranky enough to sometimes send out a fake alarm."

"Natural" neutrinos can also be detected in radiation from the sun and from cosmic rays that strike Earth's atmosphere, she said. Neutrinos can be produced artificially too by nuclear power plants and research accelerators. Among those natural and artificial sources, only solar neutrinos and those emitted by one type of accelerator have energy levels that can overlap those from a supernova.

The new SNEWS network has not yet detected a supernova. "We don't know when it will have an opportunity to perform a real detection: tomorrow, next month, next year, or in several decades from now," said noted astrophysicist John Bahcall at Princeton.

These events occur "no more than a few times per century," Scholberg said. "What that means is that if one happens you have to be really sure to get every possible piece of information from it. And it could be hours, or maybe even days before you actually see light coming out."

A gravitational collapse supernova erupts when a star at least eight times more massive than our sun runs out of fuel. With the energy of nuclear fusion no longer available to support its massive internal structure, the giant star begins imploding drastically into a city-sized superdense neutron star. After the stellar material collapses, a light-producing shock wave begins to fan out from the region of collapse. But it is the nature of particles of light - called photons - to interact with material they are passing through, in this case matter that is being squeezed into the densities of atomic nuclei. "As a result, light announcing the advent of a supernova cannot exit the region until the shock wave does, which can take hours and possibly days," Scholberg said. But almost all the energy emanating from the collapsing star is actually in the form of neutrinos. "They come out of supernovas like crazy," she said.

A minority of neutrinos are produced from evolving supernovas when protons and neutrons are squeezed together to form neutrons. Most are created because conditions are hot and dense enough to create "every kind of possible particle interaction," Scholberg said. "There is a phase where everything is so dense that even neutrinos are trapped, but that lasts only about 10 seconds," she added. After that neutrinos are free to leave because they interact only rarely with matter. They are so elusive, in fact, that most pass through the entire Earth without hitting anything.

"SNEWS will be invaluable for astronomy and physics," said Bahcall, who has advised the network's organizers. "Astronomers will rush with their telescopes that use ordinary light to observe the explosion in its earliest stages. And physicists throughout the world will pour over their recent data to study the details of the neutrino events from the supernova. We should have a wealth of new and unique results about the physical properties of neutrinos from the first discovery by SNEWS. And we will learn a lot of things about the interior of a stellar explosion that we could otherwise not study."

The last gravitational collapse supernova to be observed near our Milky Way galaxy occurred in 1987 when a brilliant flash erupted at the location of a blue supergiant giant star named Sanduleak-69 202 in the Large Magellanic Cloud. Its early observation by four different neutrino detectors operating at the time also "brought the field of supernova neutrino astrophysics to life," the authors said. Besides outpacing light in announcing the explosion, the neutrinos carried information that helped scientists confirm theories about gravitational collapses in such supernovas, their paper added. In addition, the information helped scientists define the limits of neutrino properties, such as neutrino masses.

The first of three known types of neutrinos were first experimentally observed only in 1956 and until recently all neutrinos were thought to be completely massless. The discovery that neutrinos actually have mass resulted in part from studies of cosmic ray neutrinos at Super-Kamiokande, Scholberg said. That detector facility, located in an underground zinc mine, compared neutrinos emanating from the atmosphere above with those that had to pass through the earth from the atmosphere on the other side of the globe. Researchers found that neutrinos traveling the extra 13,000 kilometers changed forms - or "flavors" - over the longer distances. "The only way for that to happen is if they have mass," Scholberg said.