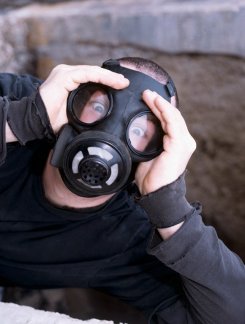 Researchers from the University of Pittsburgh have synthesized a simple molecule that not only produces perfectly uniform, self-assembled nanotubes but creates what they call a "nanocarpet", where the nanotubes organize themselves into an expanse of upright clusters that resemble the fibers of a shag rug. Additionally, the tubes display sensitivity to different agents by changing color and can be trained to kill bacteria, such as E. coli, with a jab to its cell membrane. The single-step synthesis of the compound that produced these unique nanotube structures is described in the Journal of the American Chemical Society. The research has as its goal the development of a paint that in the event of biological or chemical agents being deployed would change color and simultaneously destroy the deadly substances.

"In these nanotube structures, we have created a material that has the ability to sense their environment. The work is an outgrowth of our interest in developing materials that both sense and decontaminate chemical or biological weapons," said senior author Alan J. Russell of the University of Pittsburgh School of Medicine.

"This alignment of nanotubes in the absence of a template is an accomplishment that has eluded researchers," said Dr. Russell.

"To our knowledge, the remarkable self-assembly of this inexpensive and simple lipid is unprecedented and represents an important step toward rational design of bioactive nanostructures. In addition, because they form within hours under room-temperature conditions, the significant costs of synthesizing carbon nanotubes can be reduced," explained first author Sang Beom Lee.

To test the nanostructure's potential as a biosensor and antimicrobial, the authors conducted studies using the water-based nanotubes. Normally a neutral color, when exposed to ultraviolet light the nanotubes changed to a permanent deep blue. The process also chemically altered the nanotubes so that they became polymerized, giving them a more firm structure. Polymerized, these nanotubes could change from blue to other colors, depending on its exposure to different materials. For instance, in tests with acids and detergents, they turned red or yellow.

The most critical tests, say the researchers, were those involving E. coli, which were conducted to assess the material's interactions with living cells. In the presence of E. coli, some strains of which are food-borne pathogens, the nanotubes turned shades of red and pink. Moreover, with the aid of an electron microscope, the researchers observed the tubes piercing the membranes of the bacteria like a needle being inserted into the cell. Both the polymerized (those that can change color) and the unpolymerized nanotube structures were effective antimicrobials, completely killing all the E. coli within an hour's time.

"We are very encouraged by these results and we will be continuing our investigations of this novel material," concluded Dr. Russell.