You are here: Home › News › Water Disinfection Leads To Toxic Tapwater
By Will Parker on September 15, 2004 in News 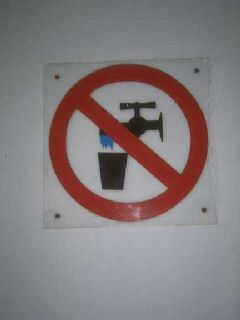 A newly discovered disinfection byproduct (DBP) found in drinking water treated with chloramines is the most toxic ever found, says a scientist from the University of Illinois who tested the samples. The discovery raises concerns regarding an EPA plan to encourage all U.S. water treatment facilities to change to chlorine alternatives, said Michael J. Plewa, a genetic toxicologist. “This research says that when you go to alternatives, you may be opening a Pandora’s box of new DBPs, and these unregulated DBPs may be much more toxic, by orders of magnitude, than the regulated ones we are trying to avoid.”

The use of chloramines, a combination of chlorine and ammonia, is one of three alternatives to chlorine disinfectant, which has been used for more than 100 years. Other alternatives are chlorine-dioxide and ozone. All treatments react to compounds present in a drinking water source, resulting in a variety of chemical disinfectant byproducts.

Plewa and colleagues report on the structure and toxicity of five iodoacids found in chloramines treated water in Corpus Christi, Texas, in the journal Environmental Science & Technology.

“The iodoacids may be the most toxic family of DBPs to date,” Plewa said. One of the five detailed in the study, iodoacetic acid, is the most toxic and DNA-damaging to mammalian cells in tests of known DBPs. “These iodoacetic acids raise new levels of concerns. Not only do they represent a potential danger because of all the water consumed on a daily basis, water is recycled back into the environment. What are the consequences? The goal of Stage 2 is to reduce DBPs, particularly the ones that fall under EPA regulations, and especially the ones that have been structurally identified and found to be toxic.”

Plewa noted that because so many new DBPs are being found in drinking water, two basic questions should be asked: How many are out there? And how many new ones will be formed as chlorine treatments are replaced with alternative methods?