You are here: Home › News › Lactic Acid Not The Culprit In Muscle Fatigue
By Will Parker on August 20, 2004 in News 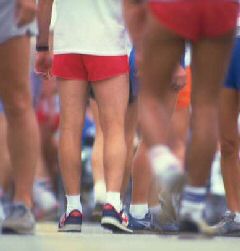 Scientists at La Trobe University in Melbourne and at the University of Aarhus in Denmark have discovered the mechanism by which acidity helps prevent muscle fatigue. Their discovery overturns the previously held belief among physiologists and athletes that acidity, through a build up of lactic acid, is a major cause of muscle fatigue.

The research, by Professors George Stephenson and Graham Lamb in Australia and Mr Thomas Pedersen and Professor Ole Nielsen from Denmark, appeared in the journal of the American Association for the Advancement of Science.

The researchers carried out their project using a technique in which the surface membrane of single muscle fibres – which are half the thickness of a human hair – is peeled away, without interfering with the ability of the muscle fibre to contract normally to electrical stimulation. This enabled the researchers to change conditions inside the muscle cells and study the effects of acidity on the force response.

“We found that muscles play a clever trick in which they use acidosis – the build-up of acid – to help ensure that they keep responding properly to nerve signals and so avoid the fatigue that would otherwise occur,” said Lamb.

“Chloride ions play an important role in muscle by dampening the excitability of the surface membrane and T-system, ensuring that they only respond when stimulated by nerve signals and do not become spontaneously excited,” Stephenson said. “When a muscle is worked hard, potassium ions come out of the fibres and make the membrane less excitable. The acidity generated inside a working muscle helps counter this depressing effect by reducing the influence of chloride, which helps the muscle membranes stay excitable. It is a very clever trick because rested muscles need the chloride effect normally to prevent them spontaneously contracting. The acidity produced by the strenuous exercise reduces chloride’s stabilising effect, enabling the impulses to keep exciting the muscle when they would otherwise fail. We have concluded that intracellular acidosis increases the excitability of the T-system, thus counteracting fatigue at a critical step in excitation-contraction-coupling.”

“This finding should be of great interest not only to elite athletes and the many laboratories around the world involved in muscle research,” concluded the researchers.