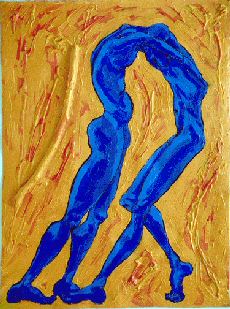 Physicists believe that when the universe began, matter and antimatter were present in equal amounts. But all observations indicate that the universe is made only of matter, so one of the big questions that physicists want to answer is "what happened to the antimatter?"

Physicists conducting the BaBar (B and B-Bar) experiment at the Stanford Linear Accelerator Center (SLAC) yesterday announced exciting new results demonstrating a dramatic difference in the behavior of matter and antimatter. The results have been submitted to the Physical Review Letters journal.

SLAC's PEP-II accelerator collides electrons and their antimatter counterparts, positrons, to produce an abundance of exotic heavy particle and anti-particle pairs known as B and anti-B mesons. These rare forms of matter and antimatter are short-lived, decaying in turn to other lighter subatomic particles, such as kaons and pions.

"If there were no difference between matter and antimatter, both the B meson and the anti-B meson would exhibit exactly the same pattern of decays. However, our new measurement shows an example of a large difference in decay rates instead," said BaBar spokesman Marcello Giorgi.

By sifting through the decays of more than 200 million pairs of B and anti-B mesons, BaBar experimenters have discovered striking matter-antimatter asymmetry. "We found 910 examples of the B meson decaying to a kaon and a pion, but only 696 examples for the anti-B mesons," Giorgi said.

While BaBar and other experiments have observed matter-antimatter asymmetries before, this is the first instance in B decays of a difference obtained by simply counting up the number of matter and antimatter decays, a phenomenon known as direct charge parity (CP) violation. "We have observed a clear, strong signal for asymmetrical behavior of matter and antimatter resulting from the direct CP violation mechanism," said James Olsen, one of the leaders of the analysis.

The new observation of a 13 percent preference for the B meson over the anti-B meson dwarfs a similar effect observed in kaons at only a tiny rate of 4 parts in a million. "The effect we have measured with B mesons is roughly 100,000 times stronger than for kaons," Olsen said. "The pattern of different types of matter-antimatter asymmetries is starting to come together into a coherent picture."

Physicists speculate that subtle differences between the behavior of matter and antimatter must be responsible for the matter-antimatter imbalance that developed in our universe. But current knowledge of these differences is incomplete and insufficient to account for the observed matter domination. CP violation is one of the three conditions outlined by Russian physicist Andrei Sakharov to account for the observed imbalance of matter and antimatter in the universe.

"The new measurement is very much a result of the outstanding performance of SLAC's PEP-II accelerator and the efficiency of the BABAR detector," Giorgi said. "The accelerator is now operating at 3 times its design performance and BaBar is able to record about 98 percent of collisions."

"The observation of the direct CP violation effect in B decays is a significant step forward in assembling the pieces of the puzzle of matter versus antimatter," said SLAC Director Jonathan Dorfan.