You are here: Home › News › High Quality Meteor Spectrum Caught By Chance
By Will Parker on August 2, 2004 in News 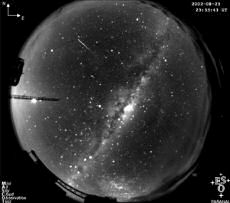 Astronomers were lucky enough to record the spectrum of a bright meteor when it happened – by sheer chance and against all reasonable odds – to cross the narrow slit of the FORS1 instrument on the ESO Very Large Telescope in Chile.

At the time of this unlikely event, the telescope was performing a series of 20-minute spectroscopic exposures of a supernova in a distant galaxy in order to establish constraints on the dark energy content of the Universe. Thanks to its enormous light-collecting and magnifying power, the VLT recorded the spectrum of the meteor trail perpendicular to its path on one of these exposures. “We really hit the jackpot”, says ESO astronomer Emmanuel Jehin: “The chances of capturing a meteor in the narrow slit of the FORS1 spectrograph are about as big as for me winning the national lottery.”

Meteor spectra have on occasion been obtained serendipitously during photographic star spectra surveys. But this is now perhaps the only meteor spectrum recorded with a large telescope and a modern spectrograph. The spectrum covers the wavelength range from 637 to 1050 nm, which is dominated by emissions from air atoms and molecules in the meteor path and teach us about the collision processes in the wake of a meteoroid.

The rapid motion of the meteor across the sky resulted in a very brief exposure while crossing the narrow spectrograph slit – only 1/50 of a millisecond – and despite the relative brightness of the meteor it was only thanks to the VLT’s great light-gathering power that any record was procured. The meteor was estimated at magnitude -8, or nearly as bright as the first-quarter Moon.

Although it is not possible to be sure from which shower this meteor belongs, a possible candidate is the Southern May Ophiuchid shower which appears from a direction just east of the bright star Antares. The shower contributes only one or two meteors per hour but was one of the stronger showers of that night.

Inspection of the spectrum revealed about 20 telltale meteor emissions of oxygen and nitrogen atoms and nitrogen molecules. The ratio of atomic and molecular emissions could be used as a “thermometer” to measure the conditions in the meteor-induced hot gas in the wake of the meteoroid, by means of laboratory measurements and meteor models that calibrate the VLT data. The meteor spectrum also provided a first view of such an object in the near-infrared window between wavelengths 900 and 1050 nm. This spectral region contains relatively strong lines of atomic carbon, but no such emissions were detected.

“We calculated that these lines should have been visible if all atmospheric carbon dioxide in the meteor path was dissociated into carbon and oxygen atoms,” says Peter Jenniskens of the SETI Intitute, “but they were conspicuously absent”. This observation is important because it sets new constraints on the efficiency of meteor-induced atmospheric chemistry at the time when life began on our planet.