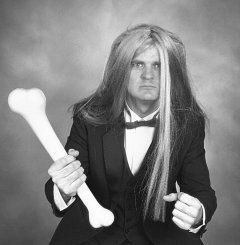 Researchers from the University of Michigan and the University of California have discovered a dramatic increase in human longevity that took place during the early Upper Paleolithic Period, around 32,000 years ago.

In the study, appearing in the Proceedings of the National Academy, anthropologists Rachel Caspari and Sang-Hee Lee found a dramatic increase in longevity among modern humans during that time: the number of people surviving to an older age more than quadrupled.

Caspari, of the U-M Anthropology Museum, said this increase in the number of relatively old people likely had a major impact, giving modern humans a competitive edge that ensured their evolutionary success. For the study, the researchers analyzed the ratio of older to younger adults in hominid dental samples from successive time periods: later australopithecines, Early and Middle Pleistocene Homo, Neanderthals from Europe and Western Asia and post-Neanderthal Early Upper Paleolithic Europeans. They used a new analytical resampling technique allowing them to assess the significance of differences in rates of molar wear.

Other scientists have argued that the presence of grandmothers confers an important evolutionary advantage since they heavily invest their knowledge and other resources in their reproductive-age daughters and their daughters' offspring.

By calculating the ratio of old-to-young individuals in the samples from each time period, the researchers found a trend of increased survivorship of older adults throughout human evolution. It's not just how long people live that's important for evolution, but the number of people who live to be old, Caspari and Lee pointed out.

The increase in longevity that occurred during the Upper Paleolithic period among modern humans was dramatically larger than the increase identified during earlier periods, they found. "We believe this trend contributed importantly to population expansions and cultural innovations that are associated with modernity," they wrote.

A larger number of older people allowed early modern humans to accumulate more information and to transmit specialized knowledge from one generation to another, they speculated. Increased adult survivorship also strengthened social relationships and kinship bonds, as grandparents survived to educate and contribute to extended families and others. Increased survivorship also promoted population growth, the study authors explain, since people living longer are likely to have more children themselves, and since they also make major contributions to the reproductive success of their offspring.

"Significant longevity came late in human evolution and its advantages must have compensated somehow for the disabilities and diseases of older age, when gene expressions uncommon in younger adults become more frequent," the authors noted. "There has been a lot of speculation about what gave modern humans their evolutionary advantage," Caspari said. "This research provides a simple explanation for which there is now concrete evidence: modern humans were older and wiser."