You are here: Home › News › Thousands In UK May Be Infected With Mad Cow Disease
By Will Parker on May 24, 2004 in News 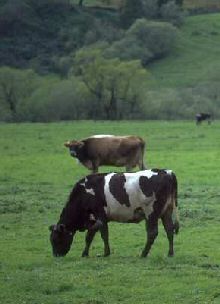 A group of scientists in the United Kingdom has found that 3 out of 12,674 stored appendix and tonsil samples showed evidence of the prion protein associated with vCJD. They urge caution, however, about the way the results are interpreted.

The study, appearing in The Journal of Pathology, was designed to help health policymakers estimate the number of people who could become ill from vCJD by assessing the possible number of people in the UK who might be incubating the disease. Based on the three positives and calculations in the highest risk group, the researchers estimate that about 3,800 individuals in the UK would test positive.

Although the scientists are certain that prion proteins were present in three samples, only one showed a pattern of prion accumulation that resembled that seen in tissue of known vCJD cases. The other two had different patterns of accumulation, so their significance is uncertain. However, prion protein accumulation has not yet been described in any other disease, so data from these two samples cannot be dismissed.

Lead author of the paper David Hilton, of Derriford Hospital, said “Our findings need to be interpreted with caution, but cannot be discounted. There is still much to learn about vCJD and presence of the protein in these tissue samples does not necessarily mean that those affected will go on to develop vCJD. It is important that we clarify the significance of these findings by prospective screening of fresh tonsillectomy tissue”

In contrast to these high estimates of possible future incidence, clinical cases of vCJD remain low and seem to be in decline. “Although the numbers of cases are currently in decline, the possibility of further rises cannot be excluded,” say the authors.

“The study also reinforces the importance of measures taken by the UK Department of Health to reduce the risk of spread of vCJD via blood products and surgical instruments,” they add.