Sun's Iron Core May Be Cause Of Solar Flares 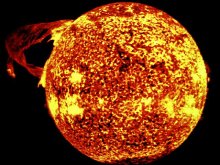 The spate of solar storms that have hit Earth in recent days may be caused by the sun's iron-rich interior, says a University of Missouri-Rolla researcher who theorizes that the sun's core is made of iron rather than hydrogen.

Dr. Oliver Manuel, a professor of nuclear chemistry, believes that iron, not hydrogen, is the sun's most abundant element. In a paper accepted for publication in the Journal of Fusion Energy, Manuel asserts that the "standard solar model" - which assumes that the sun's core is made of hydrogen - has led to misunderstandings of how such solar flares occur, as well as inaccurate views on the nature of global climate change.

Recent solar flares erupting on the sun's surface have unleashed powerful geomagnetic storms - gigantic clouds of highly charged particles that pose a threat to electric utilities, high-frequency radio communications, satellite navigation systems and television broadcasts. Continued turbulence on the sun will remain a concern for the coming days, according to space forecasters.

Manuel claims that hydrogen fusion creates some of the sun's heat, as hydrogen - the lightest of all elements - moves to the sun's surface. But most of the heat comes from the core of an exploded supernova that continues to generate energy within the iron-rich interior of the sun, Manuel says.

Manuel's paper, "Superfluidity in the Solar Interior: Implications for Solar Eruptions and Climate," suggests that the conventional view of how magnetic fields in the sun's interior - the cause of solar flares and storms - are formed is flawed. "The prevailing opinion in the solar physics community is that solar dynamos generate the sun's magnetic fields by plasma flows in the outer part of the sun. The model of a hydrogen-filled sun offers few other options," Manuel says.

Manuel offers another explanation, based on his assertion that the solar system was born catastrophically out of a supernova - a theory that goes against the widely-held belief among astrophysicists that the sun and planets were formed 4.5 billion years ago in a relatively ambiguous cloud of interstellar dust. In his latest paper, Manuel posits that the changing fields are caused either by the magnetic field of the rotating neutron star at the core of the sun itself or by a reaction that converts the iron surrounding the neutron star into a superconductor. This reaction is called Bose-Einstein condensation.

While Manuel's theory is seen as highly controversial by many in the scientific community, other researchers have confirmed that distant solar systems orbit stars that are rich in iron and other metals. Last summer, astronomer Debra Fischer at the University of California, Berkeley, presented her findings of a study of more than 750 stars at the International Astronomical Union meeting in Sydney, Australia. Fischer and her team determined that 20 percent of metal-rich stars have planets orbiting them.

Manuel believes Fischer's research helps to confirm his 40-year effort to change the way people think about the solar system's origins. He thinks a supernova rocked our area of the Milky Way galaxy some five billion years ago, giving birth to all the heavenly bodies that populate the solar system.

Back in 1975, Manuel and another UMR researcher, Dr. Dwarka Das Sabu, first proposed that the solar system formed from the debris of a spinning star that exploded as a supernova. They based their claim on studies of meteorites and moon samples which showed traces of strange xenon. Data from NASA's Galileo probe of Jupiter's helium-rich atmosphere in 1996 reveals traces of strange xenon gases - solid evidence against the conventional model of the solar system's creation, Manuel says.

Manuel first began to develop the iron-rich sun theory in 1972. That year, Manual and his colleagues reported in the British journal Nature that the xenon found in primitive meteorites was a mixture of strange and normal xenon. The strange xenon is enriched in isotopes that are made when a supernova explodes, the researchers reported, and could not be produced within meteorites.

Three years later, Manuel and Sabu found that all of the primordial helium in meteorites is trapped in the same sites that trapped strange xenon. Based on these findings, they concluded that the solar system formed directly from the debris of a single supernova, and the sun formed on the supernova's collapsed core. Giant planets like Jupiter grew from material in the outer part of the supernova, while Earth and the inner planets formed out of material form the supernova's interior. This is why the outer planets consist mostly of hydrogen, helium and other light elements, and the inner planets are made of heavier elements like iron, sulfur and silicon, Manuel says.

Strange xenon came from the helium-rich outer layers of the supernova, while normal xenon came from its interior. There was no helium in the interior because nuclear fusion reactions there changed the helium into the heavier elements, Manuel says.