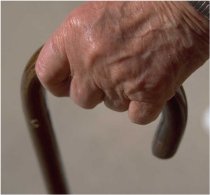 There was a striking association in women between being overweight at 70 and developing Alzheimer's disease (AD) ten to 18 years later, according to a Swedish study reported in the July 15 issue of the Archives of Internal Medicine. In the study, sponsored in part by a grant from the Alzheimer's Association, 392 adults were followed for 18 years, from age 70 to 88, to determine whether being overweight put them at increased risk for dementia and AD.

It has been hard to determine how obesity and overweight affect risk in AD because weight loss frequently occurs before clinical symptoms of dementia appear, according to first author of the study, Deborah Gustafson, Ph.D., who conducted research for the study while at Gothenburg University, Sweden.

"Overweight and obesity are very closely associated with vascular diseases, such as diabetes, coronary heart disease and hypertension. And there is more and more evidence that vascular diseases are very important as risk factors in AD," said Gustafson. "But because of the weight loss associated with pre-clinical dementia, it takes an extended study to uncover the dangers that overweight may pose to a very elderly population."

Women in the study who developed AD between the ages of 79 and 88 were significantly more likely to have been overweight at age 70, as well as at 75 and 79. The women who developed AD were much heavier, with a body mass index (BMI) an average of 3.6 units higher than that of women who did not become demented. For every unit increase in BMI at age 70, the risk of developing AD increased by 36 percent.

BMI is a measure of body fatness in both men and women based on height and weight. BMI is calculated as kilograms per meter squared. A BMI between 18.5 and 24.9 is considered normal weight. A BMI over 25 is defined as overweight and 30 or greater as obese. Women who had a BMI greater than 29 when they were 70 years old were more likely to have AD in their 80s. A BMI of 29 corresponds to a woman who is 5 feet 4 inches tall and weighs about 170 pounds.

"It's important to note that the ideal weight is not super-skinny," said Gustafson. "The average BMI for women who did not develop AD was 25, the border between healthy and overweight. A moderate, healthy weight seems to be best."

The study is part of a larger population-based longitudinal health study that enrolled a representative group of 70-year-old residents of Gothenburg, Sweden in 1970. One hundred and sixty-six men and 226 women who had no symptoms of dementia, based on psychiatric evaluations, were enrolled.

Body mass index (BMI) for subjects in the study was determined at age 70, 75, and 79. Neuropsychiatric evaluations for dementia were performed approximately every 5 years until age 81 and every other year thereafter. Because all participants are in the Swedish health care system, it was possible to follow everyone enrolled in the study.

There was no association in women between overweight and obesity at 70 and 75 and the development of AD at ages 70-79. This may be the result of weight decline in pre-clinical dementia. "It's possible that overweight at ages 50 or 60 affected risk of dementia in these women," said Gustafson. "But we don't have that data in this group of women."

It was not possible to establish a relationship between overweight and obesity and risk of dementia in the men in the study because of the small number of men living into high old age and thus, the smaller number of dementia cases.

Obesity and overweight are epidemic in the US and Europe with the highest prevalence among adults fifty and older. These findings have important public health implications, according to the authors. The prevention of overweight and obesity, even in old age, might help to prevent dementia, the fastest growing disease of late life.