You are here: Home › News › Adolescents Wired For Addiction
By Will Parker on June 23, 2003 in News 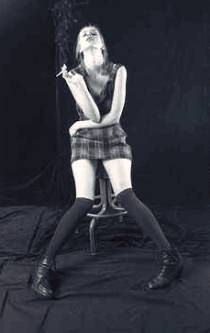 Adolescents are more vulnerable than any other age group to developing nicotine, alcohol and other drug addictions because the regions of the brain that govern impulse and motivation are not yet fully formed, Yale researchers have found.

After conducting an analysis of more than 140 research studies from across the basic and clinical neurosciences, including many conducted at Yale, the researchers concluded that substance use disorders in fact constitute neurodevelopmental disorders.

“Several lines of evidence suggest that sociocultural aspects particular to adolescent life alone do not fully account for greater drug intake,” said Andrew Chambers, M.D., assistant professor of psychiatry at Yale School of Medicine and lead author of the study published this month in the American Journal of Psychiatry. “And while we strongly suspect that genetic factors in individuals can lower the threshold of drug exposure required for ‘tripping the switch’ from experimental to addictive drug use, here we have a phenomena where a neurodevelopmental stage common to virtually everyone regardless of genetic make-up confers enhanced neurobiological vulnerability to addiction.”

Chambers said that this perspective is possible when viewing brain systems involved in motivation and addiction as distributed components that undergo unique developmental histories.

“Particular sets of brain circuits involved in the development of addictions are the same ones that are rapidly undergoing change during adolescence,” he said. “Normally these processes cause adolescents to be more driven than children or adults to have new experiences. But these conditions also reflect a less mature neurological system of inhibition, which leads to impulsive actions and risky behaviors, including experimentation and abuse of addictive drugs.”

“Because of developmental changes in brain regions concerned with the formation of adult motivations, the actions of drugs in those regions to cause addiction may occur more rapidly and potentially with greater permanency,” Chambers said.

He said the implications of this review are that addictions should be viewed as developmental disorders and that researchers should concentrate on the adolescent period when considering treatment and prevention of addictions. Also, it highlights the importance of researching the impact of current psychotropic medication treatment practices in childhood and adolescence on the incidence of addictions in adulthood.

“The identification of adolescent subgroups with heightened vulnerability to substance abuse disorders, development of evidence-based preventative strategies, and refinement of pharmacotherapeutic and psychosocial treatments are important areas to pursue in order to reduce the large impact of substance use disorders upon society,” he said.

Carnival in Mainz adolescents dressed up as harlequins -1910 OLD PHOTO

Carnival in Mainz adolescents dressed up as harlequins -1910 OLD PHOTO