You are here: Home › News › Pool Chlorine Implicated In Childhood Asthma
By Will Parker on May 29, 2003 in News 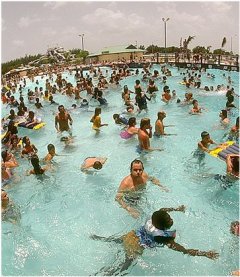 The chlorine used to disinfect indoor swimming pools may be implicated in the surge of childhood asthma in developed countries, suggests research in Occupational and Environmental Medicine.

Trichloramine, or nitrogen trichloride, a highly concentrated volatile by-product of chlorination, that is readily inhaled and generated during contact between chlorine and organic matter such as urine or sweat, seems to be the culprit.

The research team measured levels of lung proteins (SP-A, SP-B, and CC16) associated with cellular damage in the blood samples of 226 healthy primary school children from rural and urban schools. The children had swum regularly at indoor pools weekly or fortnightly since early childhood.

Blood samples from 16 children, aged between 5 and 14, and 13 adults, aged between 26 and 47, were also analysed before and after a session in an indoor pool to test for the immediacy of the effects of trichloramine.

Finally, the researchers assessed the prevalence of childhood asthma, using data from a survey of almost 2000 children aged between 7 and 14, carried out between 1996 and 1999.

The results showed that regular attendance at indoor swimming pools was consistently and significantly associated with the destruction of the cellular barriers protecting the deep lung (respiratory epithelium), making them “leaky” and potentially more vulnerable to the passage of allergens.

The effects were cumulative, and for children who swam the most frequently, equivalent to the damage found in the lungs of regular smokers, say the authors.

The immediacy of the damage done was evident in the levels of the marker proteins, which were significantly higher after just one hour spent at the poolside, without swimming.

An increase in IgE, a risk factor for asthma, was not associated with regular swimming itself, but was linked to an increase in the smaller of the proteins indicative of lung damage (SP-B). Furthermore, chest tightness after exercise, and overall prevalence of asthma, were both linked to the cumulative amount of time spent at indoor pools.

The effects were the same for children wherever they lived, and remained after taking account of other environmental pollutants. But they were strongest in the youngest children.

The authors point out that swimming is recommended for asthmatics because the hot humid air in pools compensates for the effects of exercise, but not if the air is laden with toxins. Levels of trichloramine can vary greatly, depending on how crowded a pool is, how clean the swimmers are, and how well ventilated the area is.

The authors conclude that chlorinated indoor swimming pools might explain the rise in diagnoses of childhood asthma. “The question needs to be raised as to whether it would not be prudent in the future to move towards non-chlorine based disinfectants, or at least to reinforce water and air quality control in indoor poolsin order to minimise exposure to these reactive chemicals,” they add.