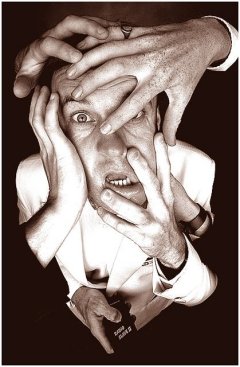 From "Don't Worry, Be Happy" to "Hakuna Matata," popular culture warns that worrying interferes with happiness and health. But results from a new study at the University of Arkansas show that worrying actually may have healthful benefits - shielding people from the effects of anxiety, at least in the short term.

These protective benefits stem from the way people process potentially threatening information, explained Nathan Williams, assistant professor of psychology and lead investigator on the study. Williams presented his study at the Association for Advancement of Behavior Therapy meeting in Reno, Nevada.

While anxiety tends to arise from fearful imagery, worry manifests in the form of words, Williams said. This difference is not just a matter of form, but it represents a difference in the way the brain interprets, processes and responds to information. Mental images have more instantaneous power to evoke emotional reaction, and this can lead to less logical, less effective responses to threatening information.

"Anxiety is driven by imagery, and that imagery leads to pure, raw emotion - often fear," Williams said. "Engaging in worry allows people to translate those images into words, and that process of translation can circumvent the efferent command center in the brain and reduce the raw, negative emotion associated with the imagery in the first place."

To test the mitigating effects of worry, Williams asked 96 individuals to view a series of images. Of those images, 15 represented what people would normally deem positive in content, 15 neutral and 15 negative. As a means of ensuring that people scrutinized the images without consciously drawing their attention to emotional content, Williams asked participants to code each image according to its level of pleasantness.

Following this exercise, Williams administered a five-minute distraction task, then led participants through a test of memory. Individuals were asked to recall as many of the 45 images as they could, and the order of recall was recorded. This produced a measure of explicit memory - their ability to remember what they originally saw.

Participants also completed two psychometric scales, measuring their vulnerability to anxiety and their proclivity to worry.

"Cognitive vulnerability to anxiety is based on how people mentally simulate potentially threatening situations," Williams said. "We know from past research that people who are prone to anxiety interpret more of the information about their situation and surroundings as threatening. They attend to the negative details and envision negative outcomes."

When faced with potential threat, all individuals attempt to mentally simulate possible outcomes of the situation, Williams explained. But among those most vulnerable to anxiety, these simulations become systematically biased. They construct simulations on incomplete information; they perceive situations as involving rapidly-rising risk or danger and as swiftly leading toward dreaded ends.

Indeed, Williams' study showed that individuals with a cognitive vulnerability to anxiety recalled more negative images than did invulnerable individuals. But the study also indicated that these effects were mitigated by an individual's level of worry. Participants who showed a high cognitive vulnerability to anxiety but who also reported engaging in worry recalled significantly fewer of the negative images.

Williams suggests that by employing language-based thought processes during the study - i.e., by worrying - these individuals mitigated the impact of the threatening images, in effect protecting themselves from the negative emotions or frame of mind that those images ordinarily would have triggered.

Understanding the means by which fearful emotions and reactions can be controlled may offer new coping strategies for people who suffer from anxiety disorders, Williams said. But he cautions that, despite its palliative effects, worry can become a problem in and of itself.

"We now know that worry can be self-protective, particularly for people prone to anxiety. But that doesn't change the fact that worry can be maladaptive if people engage in it rigidly, methodically, continuously," he said.