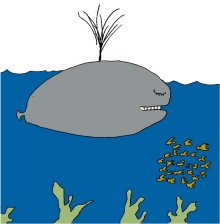 The very-low-frequency courtship songs of fin whales and blue whales are the most powerful and ubiquitous biological sounds in the oceans. But the artificial racket created by ships and other human sources could be interfering with whale reproduction and population recovery, marine scientists report in the latest edition (June 20, 2002) of the journal Nature.

Scientists from the University of California-Santa Cruz, Cornell University, Mexico’s Universidad Aut�noma de Baja California Sur and the California Academy of Sciences studied fin whale courtship songs in frequencies far below the range of human hearing. Natural sounds that low often can travel many hundreds, if not thousands, of miles under water. But so can very-low-frequency, human-made noises that have increased dramatically in the last 100 years of motorized shipping.

“We hypothesize that whale songs evolved to take advantage of the ocean’s sound channel, especially for some of their most important kinds of communication, including finding a mate,” says Christopher W. Clark, the I.P. Johnson Director of the Bioacoustics Research Program at the Cornell Lab of Ornithology and a co-author of the Nature report, “Only male fin whales sing loud songs.”

“Twenty to 25 million years of evolution are being undone in a hundred years,” Clark says. “There are 100-year-old whales alive today who can probably remember when the ocean was a much quieter place, and they could communicate with colleagues across grand expanses of ocean.”

The discovery about whales’ courtship songs occurred in a relatively quiet part of the seas — Loreto Bay in Mexico’s Gulf of California — where fin whales aggregate to feast on swarms of krill. Surprisingly to the scientists, some whales spend a lot of time singing during the krill feast. Special computer software, developed at the Cornell bioacoustics lab and installed onboard a converted fishing boat that was towing an array of hydrophones, helped biologists determine which whale in the bay was singing. Once a singer was located, scientists dispatched an inflatable boat to collect a small sample of skin. Genetic analysis of the biopsy samples revealed the sex of the whales. The DNA analysis found that during the monthlong study of the whales in the bay in the winter of 2000, there were 21 males and 22 females. Only the males were singing the very-low-frequency song.

The song finding in fin whales (Balaenoptera physalus ) undoubtedly also applies to the closely related blue whales (Balaenoptera musculus ) and could hold true for some other species of baleen whales, says Clark, a faculty member in Cornell’s Department of Neurobiology and Behavior. The Nature authors conclude their report by noting: “To the extent that growth of Balaenoptera populations is limited by the encounter rate of receptive females with singing males, the recovery of fin- and blue-whale populations from past exploitation could be impeded by low-frequency sounds generated by human activity.”

The study was funded by the U.S. Navy’s Office of Naval Research, which had supported previous studies by the Cornell Bioacoustics Research Program into a new type of sonar — low-frequency active (LFA) sonar — that might possibly interfere with marine mammal communications. That sonar study concluded that LFA sound does not alter marine-mammal behavior, although the animals evidently can detect it. However, older types of military sonar are among contributors to deleterious background noise in the oceans, along with commercial ships and seismic surveys, according to the marine scientists.

Additional, more-extensive studies in noisier parts of the oceans will be needed before scientists can say for sure that human-made sound is hampering whale reproduction and population recovery, Clark says. “These are animals that roam the world’s oceans, and they breed only every two to three years. In their lifetimes, the oceans have become incredibly noisy. Their world, which is so dependent on sound, is shrinking as a result of human noise. Some of these questions of human noise impact may be unanswerable in one (human or cetacean) lifetime.”

Planets Formed In Hundreds – Not Millions – Of Years