You are here: Home › News › Single-Atom Transistor Created
By Will Parker on June 13, 2002 in News 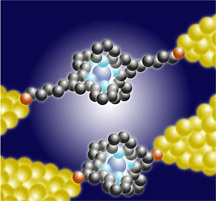 The Cornell researchers have created a single-atom transistor by implanting a “designer” molecule between two gold electrodes, or wires, to create a circuit. When voltage was applied to the transistor, electrons flowed through a single cobalt atom within the molecule. Paul McEuen, professor of physics at Cornell, describes the process by which electrons pass from one electrode to the other by hopping on and off the atom as “a virtual dance of electrons.”

McEuen and his colleagues at Cornell’s Center for Materials Research, including Dan Ralph, associate professor of physics, and graduate students Jiwoong Park and Abhay Pasupathy, report on their creation of a single-atom transistor in the latest issue (June 13) of the journal Nature .

At the heart of the Cornell group’s transistor is the “designer molecule” synthesized by Héctor Abruña, professor of chemistry and chemical biology, and graduate student Jonas Goldsmith. At the molecule’s center is a cobalt atom surrounded by carbon and hydrogen atoms and held in place on either side by molecular “handles” made of pyridine, a relative of benzene. On their outer side, the “handles” are attached to sulfur atoms, which act like “sticky fingers,” to bond the molecule to the gold electrodes. Two different molecules were studied, one with longer “handles” than the other. The shorter molecule was found to be a more efficient conductor of electrons.”As chemists, we can deliberately design and manipulate molecules to achieve a specific function,” says Abruña. “This is very important because we are now able to incorporate the properties of these molecules into electronic devices.”

The challenge faced by the Cornell researchers was to place a molecule less than two nanometers long (about the length of five silicon atoms) between two gold electrodes. To do this they used a technique called electromigration, by which an increasingly large current is run through a gold wire, forcing the atoms to migrate until the wire breaks. The molecule is then “sucked” into the gap by the high electric field present, and the sulfur “sticky fingers” bond the molecule to the gold. “Using this technique you can very reliably get wires with a gap on the order of one nanometer,” or about three silicon atoms, says McEuen.

The Cornell group plans next to focus on engineering a molecule with two different geometries (or shapes) that could act as a switch, changing between the two forms with the application of a voltage. “No one has yet put a single molecule in a circuit and activated it electronically,” McEuen observes.