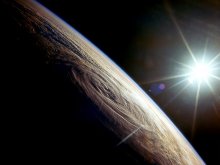 An asteroid or comet impact on Earth may have paved the way for the sudden rise of the great Jurassic dinosaurs, according to a paper to be published this week in the journal Science. Dr. Paul Olsen from the Columbia Earth Institute's Lamont-Doherty Earth Observatory and an international team of scientists reached their conclusion from an examination of a number of clues-iridium, skeletal remains, footprints, and fern spores-that create a picture of life at the dawn of the Jurassic period. "The cause and timing of the ascent of dinosaurs have been much debated. It has been impossible to draw any specific conclusions because the transition between the origin of dinosaurs and their ascent to dominance has not been sampled in detail. Our last 10 years of studying the clues held in lake sediments in eastern North America has provided us with high-resolution data that records the rise of dinosaurs across 10 degrees of latitude in strata, which, at the time, were in the tropics.

This allows us to measure time in thousands of years, instead of millions as in previous studies," said Dr. Olsen.

Olsen and his colleagues studied vertebrate fossils from 80 sites in four different ancient rift basins, part of a chain of rifts that formed as North America began to split apart from the supercontinent that existed 230-190 million years ago. These basins include half- to four-mile thick sections of continental strata, termed the Newark Supergroup, deposited during the end of the Triassic and beginning of the Jurassic periods. Examination of these strata shows that the enormous carnivorous theropod dinosaurs arose less than 30 thousand years - a geological blink of an eye - after a mass extinction on Earth. The researchers have linked the extinction with a quadrupling of iridium abundance and a spike in the concentration of fern spores found in outcropping sediments in one of these rifts, the Newark basin of New York, New Jersey, and Pennsylvania. Iridium is an element similar to platinum that is very rare in the Earth's crust, but relatively more abundant in most extraterrestrial matter. The increase of iridium in the Newark Supergroup basins may thus indicate an asteroid or comet impact. The fern spore spike is believed to be the product of a post-catastrophe ecosystem in which ferns were the first to colonize the decimated landscape. This is virtually the same scenario, now widely accepted, that resulted in the elimination of the dinosaurs 65 million years ago.

The scientists postulate that the asteroid or comet impact and the resulting death of Triassic competitors allowed a few groups of carnivorous dinosaurs to evolve in size very quickly and dominate the top of the terrestrial food chain globally.

By looking at fossilized footprints and skeletal remains from the Newark Supergroup basins, Olsen and his team determined that the giant theropods appeared less than 30 thousand years after the mass extinction of Triassic fauna, and that the peak of dinosaurian diversity in these rift basins occurred a mere 100 thousand years into the Jurassic period. This was clearly a period of explosive evolution, which gave rise to the dinosaur-dominated communities that prevailed on Earth for the next 135 million years.

Olsen's research team focused on the Newark Supergroup basins because the lake sediments allow the line between the Triassic and Jurassic periods - about 200 million years ago - to be clearly demarcated. The lake sediments recorded cyclical climate changes caused by periodic changes in the Earth's orbit, allowing for a very precise (in geological terms) measure of time.

Future research in the Newark Supergroup will test how widespread the iridium anomaly is in order to make sure it is actually a global phenomena, as well as search for additional geochemical and paleontological clues on the origin of the mass extinction of the Triassic period taxa that allowed for the great Jurassic age of dinosaurs.