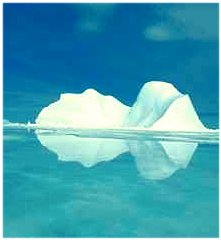 For the first time, satellite imagery has allowed scientists to observe how icebergs in a remote corner of Antarctica can disrupt an entire marine ecosystem.

Using data from three orbiting satellites, researchers have been monitoring a Connecticut-size iceberg called B-15 that broke from Antarctica's massive Ross Ice Shelf in March 2000. Within a few months, B-15 had fractured into smaller bergs that formed dams along the coast - preventing thousands of square miles of pack ice from drifting out of the Ross Sea.

As a result, large stretches of normally open ocean were covered with ice -from November 2000 to March 2001. During these crucial spring and summer months, the Ross Sea usually teems with life, as tons of microscopic marine algae - called "phytoplankton" - undergo reproductive blooms.

The Ross Sea ecosystem depends on phytoplankton - a primary food source for shrimp-like krill, which in turn are consumed by fish, seals, whales and penguins.

"B-15 was one of the largest icebergs ever recorded from the Ross Ice Shelf," said Kevin R. Arrigo, assistant professor of geophysics at Stanford and lead author of the Antarctica satellite study.

"B-15 broke into smaller pieces that prevented the normal movement of sea ice out of the region," he explained. "Sea ice is very effective at blocking light, so the phytoplankton couldn't grow - there was just too much ice around. "

Arrigo and his colleagues described their results in the April 6 issue of Geophysical Research Letters, a publication of the American Geophysical Union.

"This is the first time that satellite imagery has been used to document the potential for large icebergs to substantially alter the dynamics of a marine ecosystem," Arrigo noted.

"SeaWIFS measures the amount of light coming out of the ocean at different wavelengths," Arrigo said. "Phytoplankton are plant-like organisms that contain green chlorophyll, and with SeaWIFS, you can measure the intensity of the greenness of the water. The greener the water is, the more phytoplankton there are."

According to satellite data, extensive ice cover reduced both the area suitable for phytoplankton growth and the length of the algal growing season, causing the observed 40 percent drop in phytoplankton, which affected the entire food chain - from krill to penguins.

"We know for certain that penguins suffered breeding losses because of the icebergs in this region," Arrigo said, noting that the Ross Sea is home to 25 percent of the world population of Emperor penguins and 30 percent of Adélie penguins.

"There was a lot less food nearby for penguins to get to, so they had to go much farther to feed," he added. "In doing so, they left their nests exposed for longer periods of time than they normally would. That made them vulnerable to predators such as the skua - a large gull that feeds on chicks and the eggs. So penguin breeding success was much lower last year."

"Now the penguins have another obstacle they have to get around," Arrigo said. "Not only do they have to go farther to find food, but they have to swim around this enormously large iceberg that has found its way in their path. Some rookeries have been abandoned altogether."

Massive icebergs regularly break off from the Ross Ice Shelf every 10 years or so. While increased iceberg calving is an important indicator of climate change, Arrigo noted that the jury is still out with respect to climate change in the Ross Sea.

"On a thousand-year time scale, there's good evidence that calving from the Ross Ice Shelf has increased," he observed. "However, in the last 150 years - the period of the Industrial Revolution when human activity produced high levels of greenhouse gas - there is not much evidence that calving in the Ross Sea has increased. That's not true in other parts of Antarctica, where average temperatures have increased several degrees, causing ice sheets to rapidly melt."

Recent observations show that most of the Ross Sea pack ice has drifted away, and that phytoplankton levels are returning to normal. Researchers plan to continue monitoring the region and to assess the ecological impact of icebergs in other parts of the continent.

"Antarctica is a very expensive place to work," Arrigo observed. "Satellite technology gives us an extraordinarily powerful tool. A single satellite image can teach us more than years of on-site monitoring."