Antarctica On The Move 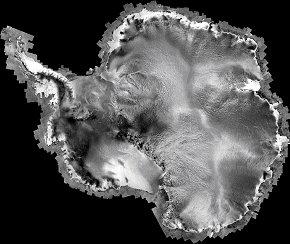 Until the mid-1990s some 1.2 million square miles of central Antarctica appeared on maps as blank white space because satellites couldn't produce detailed views of the very bottom of the world. It was a rare part of the globe that remained a geographic mystery.

But a joint project of NASA and the Canadian Space Agency (CSA) -- the RADARSAT-1 Antarctic Mapping Project, or RAMP -- has changed that. Satellite radar maps from the mission reveal an ice-covered continent in constant and surprising motion, including awesome flows in the heart of Antarctica and crumbling icebergs near the coasts.

"On each 12-minute pass over Antarctica the radar imaged swaths 100 km wide and up to 2500 km long," explains the project's principal investigator Kenneth Jezek, of Ohio State University's Byrd Polar Research Center. "Over 4500 overlapping images with a resolution of 25 meters (82 ft.) were combined into a mosaic to produce the first high-resolution map of the whole Antarctic continent."

Most of the data were obtained in a dedicated mapping mission in 1997, adds Jezek. Follow-up observations in 2000 revealed the motions of the ice.

"We need to map Antarctica accurately and observe ongoing changes because of the Antarctic ice sheet's potential contribution to sea level rise and its unique interactions with the rest of our planet," says Waleed Abdalati of NASA's Cryospheric Sciences Program. "Access to this remote and harsh place - where Earth's lowest temperature reading of -129 degrees F was measured in 1983 - is severely limited, so space-based observations are particularly valuable."

Antarctica is indeed a strange land worth studying.

Jezek notes that while Antarctica is now a frozen desert with sparse snowfall equivalent to less than three inches of rain per year, fossils show that Antarctica was once tropical and is now a potential treasure trove of untapped natural resources. Its ice sheet, compacted from unmelting snows over millions of years to a mean thickness of 6,600 feet, holds 70% of the world's fresh water. As deep as 15,600 feet, this ice preserves layer upon layer of frozen history that can reveal much about many millennia of Earth's atmospheric chemistry, microbial life forms and air pollutants. It is even a vast storehouse of well-kept meteorites.

Although Antarctica's ice is ancient, it is not without vitality. RADARSAT highlighted areas where thick freshwater ice is constantly moving from the continent's interior toward the oceans. Furthermore, the continent is ringed by "ice shelves" - huge, floating slabs of ice - and they're changing, too. Icebergs frequently crumble away from the shelves and move into the sea.

An impressive breakup happened earlier this month when the northern section of the "Larsen B" ice shelf shattered. Scientists monitored the event using images from NASA's Terra satellite. About 3,250 km2 of shelf area - a region 1.2 times the size of Rhode Island - disintegrated in a 35-day period beginning on 31 January 2002. The shattered ice formed a "plume" of thousands of icebergs now adrift in the Weddell Sea.

Icebergs that break away from ice shelves can float away and melt in warmer ocean waters, but they do not raise global sea levels. "The ice shelves are already floating," Abdalati explains. "Even before they break away, they have already displaced their equivalent mass in water."

However, he says, if Antarctica's great ice sheets - which rest on land - lost their mass to the ocean, sea levels would rise. There's enough frozen water in the West Antarctic Ice Sheet, for example, to lift global sea levels by 20 feet (6 meters). Such melting would also alter the salinity of seawater and threaten many species of marine life.

The RAMP results show that Antarctica's massive ice sheets are more active than previously thought. Twisted patterns of ice move outward from the center of the continent in all directions. In some places the flow is faster than 1 kilometer per year, while in other places it creeps at less than 10 meters in a year - much as rivers of water change speed as their width and depth varies with the terrain.

"The RAMP satellite imagery points out previously unknown ice streams hundreds of kilometers long," continues Jezek. "These energetic parts of the Antarctic Ice Sheet individually drain great volumes of ice - several cubic miles per year - into the sea. We've seen one ice stream network that sends more than 19 cubic miles of ice to the sea annually - an amount equal to burying Washington, D.C. under 1700 feet of ice every year!"

"The cause of the changes we observe remains to be determined," Jezek states. "They might in part be the last gasp of long term glaciation dating back to the 1.6-million-year Pleistocene Epoch, whose last glacial period ended only 15,000 years ago. Or they could reflect normal cyclic climate changes in either the polar ocean or atmosphere - or arise from human activity which may be causing changes in the ice sheet over a shorter period of a few centuries or mere decades."

In any case, Jezek and his fellow polar researchers agree that these radar satellite data represent a new view of Antarctica that answer some important questions about its role in the global environment - while also revealing new mysteries about Earth's southern deep-freeze.