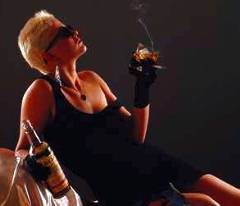 In a major finding in the search for genes of addiction, researchers at the University of South Florida and the James A. Haley Veterans’ Hospital have identified a gene that increases the risk for substance abuse. Their study, appearing in the March issue of the journal Molecular Psychiatry, provides evidence for one of the few known genetic causes of dependence on drugs such as alcohol, cocaine, and nicotine. The mu-opioid gene produces increased risk for use and abuse of drugs in general, including alcohol and nicotine, the Tampa team found. The risk does not appear to be specific to a particular drug.

“We are pleased to have identified one of the genes that plays a role in the maintenance of drug use and in the development of addiction,” said John Schinka, Ph.D., director of neuropsychology at the James A. Haley Veterans’ Hospital and professor of psychiatry at USF.

Dr. Schinka, first author for the study, emphasized that mu-opioid is only one of several genes that produce risk for drug abuse. The Tampa group will continue their search for other drug risk genes and also address how mu-opioid might interact with other genes in increasing risk.

Researchers have long known that approximately half of the risk for developing dependence was inherited. Studies of families and twins had shown that several genes were likely involved in the risk for drug dependence in general, as well as additional genes that produced risk for specific drugs such as alcohol or cocaine. Although several genes were identified as potential risk genes, scientists have had little success in identifying which of the more than 30,000 genes actually produces susceptibility.

In 1999, the Tampa team initially discovered a relationship between alcohol dependence and the mu-opioid gene. That study was conducted following reports from other laboratories showing that mice lacking the mu opioid receptor did not drink alcohol under several different experimental conditions in which they could normally be trained to drink.

The Tampa group of geneticists, psychiatrists, and psychologists thus added mu-opioid gene patterns to the list of other genes they were investigating. In comparing gene patterns between alcoholics and normal volunteers, they found that alcoholics had an abundance of a particular form of the mu-opioid gene, the “AA” form, compared to non-alcoholics. However, since many alcoholics included in the 1999 study were also abusers of other substances, the researchers could not conclude that this particular gene configuration conferred increased risk specific to alcoholism or to drug abuse in general.

“The 1999 study suggested that mu-opioid was a part of the drug abuse story, but did not allow us to ask more specific questions about relationships to other drugs or the gene’s impact in other groups such as smokers or social drinkers,” Dr. Schinka said. “In the current study, we looked at several groups, including a group of normal volunteers who had never been smokers or drinkers and a group of alcoholics who also used other drugs.”

The new research showed that the “AA” configuration occurred even in individuals with no history of smoking or drinking. However, the frequency of the configuration increased in groups with any use of alcohol or cigarettes and occurred in almost 90% of individuals treated for abuse of several drugs.